Enmoladas are more or less enchiladas with a different sauce: Yep, mole instead of a chile sauce. And while you can use any mole for enmoladas, my favorites are mole negro enmoladas: dark, rich, savory, dramatic.

If you’re not familiar with it, mole, pronounced “mole-ay,” represents a variety of sauces, not just the chocolate one you may have run across in pretty much every Mexican restaurant in America; that one, incidentally, is, more or less, mole poblano.

Oaxaca, in southern Mexico, has the richest tradition with these sauces, which tend to be baroque, time-consuming and filled with lots of ingredients. You don’t make mole on a whim, and when you make it you make a lot.

That leaves lots of leftover sauce, and one of the chief uses of leftover mole is in enmoladas. You may have seen them here in the U.S. as “mole enchiladas,” which is indeed another way to put it, but enmolada, meaning “covered in mole,” is more common south of the border.

Enmoladas have only a few rules. You really only need some sort of mole, and soft corn tortillas. Everything else is up to you.

What Mole to Use?

I do have a number of other mole recipes on this site, however, and any of them will work. Some other options for enmoladas include:

You can also buy mole negro paste online or at Latin markets for your enmoladas, then thin it down with broth, typically chicken broth. Lots of people do this, and in a pinch, go for it. But you will appreciate it more if you make your own mole.

As for a filling, you will want something shredded or diced — often turkey, chicken or pork — tossed with the mole sauce and topped with some melty cheese and maybe some herbs. In my case, I had some leftover shredded wild turkey thighs I used, and that was it for the filling. I did top the enmoladas with some crumbly cotija cheese, though.

Other great options would be barbacoa, carnitas, shredded rabbit or pheasant.

Unlike enchiladas, enmoladas are not always baked. They are more often served individually: Stuffed, rolled, put on a plate and topped with the mole, rather than pulled out of a casserole dish.

You can heat them like a regular tortilla, and that’s great if you are serving them quickly. But if you are making a tray of enmoladas, you will want to briefly fry the tortillas in vegetable oil, just for a few seconds — this makes them pliable and the coating of oil helps slow the process of disintegration. Sauce + unprotected corn tortillas = a mess after about 10 minutes.

Enmoladas don’t store too well. But they are so easy to make, once you have mole in the fridge, leftover meat and some corn tortillas, that you can make them in about 30 minutes on a worknight. 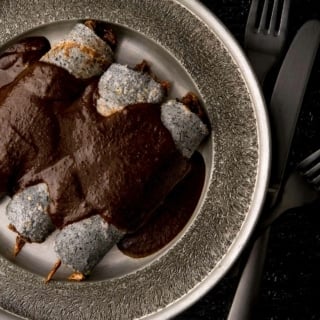 Enmoladas are very easy to make if you have all the elements on hand: filling, tortillas and mole. It's usually a weeknight meal after you made the mole on the weekend. Since these are not baked, you want to have everything ready do you can roll your enmoladas quickly and serve, so it all stays hot.
Prep Time15 mins
Cook Time20 mins
Total Time35 mins
Course: Appetizer, Main Course
Cuisine: Mexican
Servings: 4 people
Calories: 506kcal
Author: Hank Shaw

NOTE: You can make these vegetarian by filling them with cooked beans and rice, or pickled nopales.