With the possible exceptions of France, India and China, no cuisine relies so much on complex sauces as does Mexico. And the queens of those sauces are the moles, and they come in many colors. As you might have guessed, this is mole amarillo, the yellow one.

If you are looking for other mole recipes — it’s pronounced “mole-A,” not like the teeny rodent — I also have recipes for mole negro, mole coloradito and mole chichilo on this site, as well as my rendition of the classic mole poblano.

I don’t normally think of mole amarillo as ultra seasonal — after all, this sauce pairs will with lots of lighter, more summery things like poultry and fish. But I was struck with the notion of serving it in a roasted pumpkin, so here it is. An ode to autumn.

I’ve spent a lot of time working on my mole amarillo recipe, tinkering with spices and chiles and proportions. I’ve also spent a lot of time researching (and eating) this sauce wherever I can. These are the constants I have found within several dozen recipes I’ve read and tried.

First off, mole amarillo is light, complex and fragrant. It’s generally used with chicken or other white meats, and it’s zippy rather than “holy crap” spicy. There is tartness from a few tomatillos, a little sweetness from tomatoes, along with a bit of a “pumpkin spice” effect from the allspice, cinnamon, clove and pepper. This is why I decided to serve it in a pumpkin.

Even though this mole is called yellow, is often presented more as a mole naranja, or orange mole. The reason for this is because the two most traditional chiles that underpin the sauce, chilhuacle amarillo and costeño amarillo, are hard to come by, even in Mexico. So most cooks get by with the bright red guajillo chiles, sometimes with a couple deep red anchos tossed in.

I’m spending time discussing the chiles in mole amarillo because they are the prime ingredient. Pretty much everyone reading this can find guajillos or a reasonable substitute, which would be dried red New Mexico or Anaheim chiles. The thinking behind this choice is that they are bright red, and not too picante. And in the end, it will make a pretty orange mole.

What’s the difference? The chilhuacle is larger, and fuller in flavor, where the costeño is smaller and more citrusy. Both are great. And you could combine them, although I don’t think that’s traditional.

I also boost the color of my mole amarillo by using golden brandywine tomato puree, which I make in summertime and store all year. It’s a gorgeous yellow-orange, the same color as the chiles. Most recipes call for Roma tomatoes, and they are fine.

So why is this mole not overly orange, given that there are orange chiles and orange tomatoes in it? Because the spices and the tomatillos tint it more towards that yellow-green you see. Tomatillos are in almost every mole amarillo recipe because they are a pre-Columbian source of tartness and acidity; they are native, where citrus is not. You only use a few, just for that bright note.

The spice mix, with the exception of the allspice, is Spanish. It is indeed the “pumpkin spice” mix, more or less, that we all know and love… or hate. But it’s not overpowering in this sauce. You know it’s there, but the chiles and tomato are the stars.

Mole amarillo is nice right out of the blender, but it gets better once you cook it in lard and/or add masa, ideally yellow masa, to thicken it. These last two steps are important. Frying in lard tames any rough edges to the sauce, and adds needed richness to and otherwise fat-free sauce. The masa also adds richness to the mole, and if you use yellow masa it boosts color, too.

If you hate lard, use vegetable oil or butter. If you don’t have masa, skip it.

How do you serve your mole amarillo? Well, you can serve it in a pumpkin like I did — cut the top off the pumpkin, scoop out the insides, and roast it at 350°F for 45 minutes — or smother meats in the sauce for a taco filling, or as a sauce for enchiladas (in which case they will be enmoladas), or for tamales.

Once made, this sauce keeps well in the fridge and can be frozen. 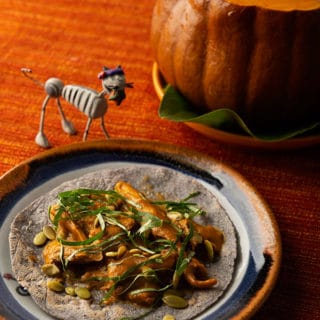 This is my rendition of mole amarillo, made as true to form as I can. I offer some substitutions for the harder to find ingredients. Serve this with shredded chicken or other poultry, pork or fish.
Prep Time1 hr
Cook Time10 mins
Course: Main Course, Sauce
Cuisine: Mexican
Servings: 8
Calories: 103kcal
Author: Hank Shaw