Chances are if you are familiar at all with Mexican mole, you are thinking of the dark, chocolatey sauce known as mole poblano, which is, arguably, the national dish of Mexico. Mole coloradito is not that mole.

Nope, this is a lighter, brighter, easier mole (pronounced “mole-ay”) that is from Oaxaca, where mole is king. Mole coloradito, if you understand Spanish, means “little red mole,” and it is indeed different from mole colorado; colorado is a color, not a state, in Spanish.

I like this mole because unlike my recipes for mole negro and mole chichilo, there are fewer ingredients and the end result is lighter, more approachable — dare I say, more fun? The other moles are amazing, but a definitely more dramatic.

If you want a quick primer on all the various moles, start here, and here.

Fun fact: Peoples from what is now Mexico are the first to domesticate the Muscovy duck. So you can find quite a number of ancient duck recipes if you look. Along those lines, I decided to pair my mole coloradito with Mexican ducks. Seems fitting, eh?

What is a Mexican duck? Well, it is Anas diazi, a variant on a mallard that lives all over Mexico as well as our border with Mexico. Holly and I got a few on a recent trip to Arizona.

And yes, that is indeed the border fence! We just had to take a photo of Mexican ducks on the Mexican border.

In the kitchen, a Mexican duck is basically the same as a mallard. And don’t get all hung up on using wild ducks or even duck at all with your mole coloradito. I’ve seen it paired with chicken, turkey, pork and even beef, although beef is unusual.

There are a few ways to eat your mole coloradito. Simplest is to just use it as a salsa for tortilla chips. Yes, really. It’s damn good that way. Most traditionally, you would simmer whatever thing you are eating with the mole in the sauce itself. I don’t love this because I find that it overcooks the mole.

Better is to cook your thing — in this case duck legs and wings — in a nice broth (even store-bought chicken or vegetable broth is fine) and then coat it with mole coloradito, garnish with some cilantro and pickled onions and call it a day.

Why? Because this keeps the flavors bright and happy.

Once made, mole coloradito will keep in the fridge for several weeks, and it freezes really well. That means you can make it on a weekend, then cook whatever you feel like during the week, coat it in warmed up mole, and have a remarkable meal on a weeknight.

Or, hell, do that thing with the tortilla chips and eat mole in front of the TV. 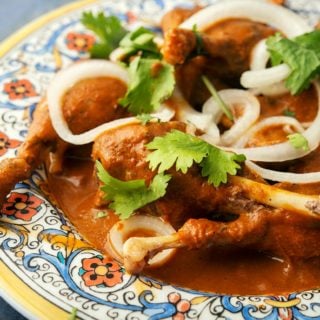 This is a lighter, brighter Mexican mole that works very well with duck, chicken, turkey or quail. Once made, it keeps very well in the fridge and freezes well, too. Most of the unusual ingredients here can be found in any Latin market in America.
Prep Time1 hr
Cook Time2 hrs
Total Time3 hrs
Course: Main Course, Sauce
Cuisine: Mexican
Servings: 12
Calories: 278kcal
Author: Hank Shaw

NOTE: Hoja santa leaves are very tough to find, so skip them if your local Latin market does not have them. They'll be where the other dried herbs are.