Mole negro, black mole, is the darkest, most layered in flavor, and silkiest sauce in all of Mexico.

Originally from Oaxaca, widely considered to be that nation’s culinary heart, mole negro is many things, but it is not that chocolaty sauce you may be thinking of right now. That sauce is likely a poorly made version of mole poblano, which most Mexican restaurants in America sell.

This sauce does include Mexican chocolate, but very little. It’s not sweet. It’s not overly spicy. It is exotic. Complex, with flavors that linger and grab you and hold on. Make it well and you will want it on everything.

Mole negro, however, is not simple. You need to make it on a day off. And it has some unusual steps that you must do or it won’t be right. Steps that will surprise you. But it’s worth it in the end.

Still with me? Awesome.

The origins of all moles, pronounced “mole-ay,” are in pre-Hispanic Mexico. At their core, this sauce is a smooth mix of seeds and nuts, chiles, often tomatoes and/or tomatillos, some sort of allium (onion or garlic), herbs, spices like cinnamon and allspice, and broth or water. Even some of the old versions have a dozen ingredients. Mole is special occasion food.

Once the Spaniards arrived, you start to see their influence. Almonds, raisins or other dried fruit, onions and garlic as we know it (not the wild varieties), as well as Silk Road spices like cloves.

Each mole has its own character, and I have several on this site. I do a mole chichilo with venison, a reddish turkey mole, and even a variant to mole called a pipian, which hinges on seeds.

But mole negro remains as the One Ring of moles. It rules them all, and, when done perfectly, is as black as Sauron’s soul. It’s hard to get it that black, so yours on your first try is more likely to be a very dark brown. That’s OK.

One mole negro ingredient that is almost impossible to find is the chilhuacle negro chile. You can buy them online sometimes, but chances are you will need to substitute mulatto or pasilla negro chiles. Lots of people do that in Mexico.

Read this recipe in full before starting, then follow the steps closely. I have designed this recipe to make things as easy as I can.

And once you make your mole negro, serve it with wild turkey, as I did in the pictures, chicken, pork, quail, rabbit, squirrel or any other light meat.

Mole negro keeps a couple weeks in the fridge, and freezes well. 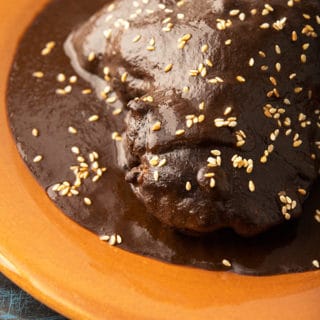 You generally simmer whatever meat you want to eat with mole (turkey, pork and chicken are most common) until tender in broth, then bathe it in this sauce. Or you can cook the meat in some thinned mole.
Prep Time1 hr 30 mins
Cook Time4 hrs
Course: Sauce
Cuisine: Mexican
Servings: 25 servings
Calories: 168kcal
Author: Hank Shaw

NOTE: If you are allergic to peanuts substitute pumpkin seeds. If you want to make this gluten free, use 3 charred and broken up corn tortillas.