Turkey mole is a Mexican classic, one with thousands of variations. This is mine.

You should know at the start that this is not a true, authentic Mole Poblano, although it is similar. That mole (pronounced mole-ay) is darker and sweeter and uses more Mexican chocolate. My mole is a hybrid between that one and a mole rojo, a red mole from Oaxaca.

This mole is rich, warming, only a tiny bit picante, and very smooth. The sauce surrounds food like a velvet blanket. It takes some doing to make, but my mole, indeed all moles, keeps for a week or two in the fridge and freezes well. Use leftover sauce on enmoladas (enchiladas covered in mole) or to coat taco meat.

But for the first meal you really ought to make turkey mole. Why? Mole in general — a layered, complex sauce — is thought to originate among the Maya in southern Mexico, and, as it happens, that is where the turkey was first domesticated, too.

Yes, really. I am surprised at how few people know that domesticated turkeys are a Central American thing. So are Muscovy ducks, for what it’s worth. At any rate, pairing an ancient sauce with a meat it was likely matched with seems like a good thing. And it is.

Wild or domesticated turkeys work well here, but the key with either is to not overcook them. I achieve this by simmering turkey in the mole with a meat thermometer stuck in the fattest part of the breast. When it hits 150°F, I remove it, slice and serve.

You’ll notice that this mole, really all moles, have a lot of ingredients. Don’t let this put you off. Most are easily available in regular supermarkets, and even the Mexican bittersweet chocolate can be switched out for any dark, bittersweet chocolate; just don’t use milk chocolate, OK?

Chile choice really makes a mole yours. My choices are a significant part of what makes this “Hank’s Mole,” and if you choose others, it’ll be your mole. Anchos are smoky and raisiny and not very hot, pasilla are mellow and also not too hot, guajillos are bright red and are moderately hot, and chipotles tend to be beige and roaring hot.

Chile choice largely determines the classic moles, too. I have recipes for most of them on this site, from mole negro — the queen of them all — to it’s almost equally dark mole chichilo, to the lighter, brighter and easier moles, mole amarillo and mole coloradito.

And while I prefer my turkey mole with the sauce in the recipe below, you can absolutely serve turkey with mole negro, chichilo and coloradito. It might be a little weird with amarillo, but go for it if you like.

As I said, once made, your mole with keep for a couple weeks in the fridge, and it freezes well. 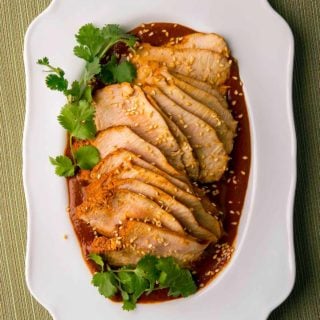 This is my version of the classic Mexican turkey mole. It's not strictly speaking a mole poblano, but it's similar. I simmer the turkey in the finished mole only until it's just barely cooked through, which keeps the meat tender and moist.
Prep Time2 hrs
Cook Time20 mins
Total Time2 hrs 20 mins
Course: Main Course
Cuisine: Mexican
Servings: 8 people
Calories: 468kcal
Author: Hank Shaw

NOTE: This recipe makes a lot more mole sauce than you need for one sitting, but it keeps well in the fridge and freezes, too. Use leftover mole for enmoladas or in tacos.