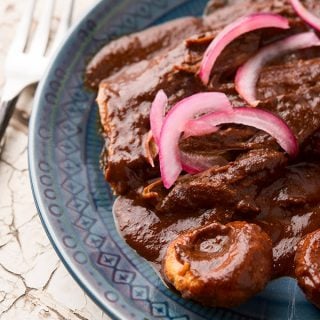 Venison mole is not only very special, but it is a real dish. Many times I adjust traditional recipes using beef or lamb or pork for venison, but this Mexican masterpiece is a thing in Oaxaca, where this recipe comes from. Mole, pronounced “mole-ay,” is a word meaning a complex, rich sauce that you really want to eat.

It’s like a salsa, only more refined. There are seven great moles of Oaxaca, a region in Mexico with a deep food culture dating back to the Aztecs and Maya.

This is one of the more obscure moles, but it’s one that is actually served with venison a lot. Most Americans are more familiar with mole poblano, which is not from Oaxaca, or mole negro, the black mole with chocolate that can range from appalling to sublime depending on who makes it. This one hinges on a particular chile, but unlike a lot of mole sauces, this one is brightly acidic and not heavily spiced with things like clove or cinnamon.

Mole chichilo tastes luxurious, tart and gives you a lovely warm feeling from the chiles, which aren’t overly spicy. It works perfectly with slow-cooked venison shoulder, neck or shanks, but you could use pork shoulder or lamb shoulder or duck legs.

Or, you can switch up and grill meats and smother them with this sauce. We tried the mole with some seared duck breasts and it was fantastic. Basically, once you make this sauce you’ll find yourself putting it on everything.

OK, I am not going to sugar coat it: You need real Mexican ingredients to make this, and the mole does take a while to come together. But, Latin markets are all over the country, and once made, the mole keeps for more than a week in the fridge. You can then use it for weeknight meals, or freeze it for later.

You will see a set number and ratio of chiles in this recipe. This is my choice, based on a lot of chichilo recipes and consultation with my friend Patricio Wise, who is a Mexican chef. Ideally you’d use a chile called a chilhuacle negro — but that seems to be impossible to get outside of Oaxaca. If for some reason you can get them, use them to the exclusion of all the other chiles.

The other chiles are very common in Mexican markets. If you can’t find some of them, lean more toward the negro (also called mulato) chiles, or the pasilla or anchos. Chile guajillos are very red and are the basis for a different mole sauce. The chipotle meco is a chipotle (a smoked, dried, red jalapeno) dried out. They are tannish brown.

Keep in mind that other than the chipotle, the other chiles are pretty mild. So even though there are lots of them in this recipe, it isn’t picante spicy.

Tomatillos are pretty widely available, but green tomatoes would also work. Avocado leaves can be tricky to find, but you can either leave them out, or use epazote leaves, or use bay leaves and a little anise seed. 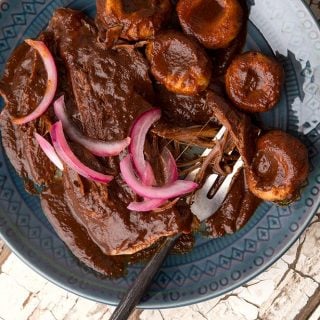 This mole is normally served with chochoyotes, little corn dumplings. They are made with masa harina, which is nixtamalized corn -- the corn they use to make tortillas or tamales. You need this or the dumplings won't taste right. You can also serve this mole over rice or in tortillas as tacos or burritos.
Prep Time1 hr
Cook Time3 hrs
Total Time4 hrs
Course: lunch, Main Course
Cuisine: Mexican
Servings: 10 people
Calories: 403kcal
Author: Hank Shaw