Pipian rojo, or red pipian, is one of the classic sauces in Mexican cuisine. It’s like a mole, only a bit simpler, and it hinges on seeds or nuts in addition to the chiles.

So I knew I had to make it after I managed to bring home a Mexican fox squirrel from the Chiracahua Mountains of southeast Arizona. These are big, orange squirrels that spend a lot of time eating pine nuts. So making a reddish-orange sauce that hinges on nuts was a natural choice.

Of course you can put your pipian rojo on whatever makes you happy. Pronounced “pip-ee-ahn row-ho,” it is traditionally served with chicken, turkey, fish, pork, and other light meats such as rabbit.

There’s a green version, too, and I use that one as a sauce for my turkey tamales.

It’s not a hard sauce to make, but you need dried chiles to make it. Thankfully the dried ones you need are readily available in many supermarkets and in every Mexican market. You want red ones, like guajillo, California, New Mexican, and, if you like it picante, some smaller hot chiles such as arbol, puya or chiltepin. You’ll also want a chipotle or three, either dried or in adobo.

After that you need nothing that a normal supermarket won’t have: sesame seeds, peanuts, pine nuts or pepitas, which are green shelled squash seeds, some spices, onion, garlic, a tomato and some nice stock, hopefully handmade.

What separates a mediocre pipian from a good one is, aside from the quality of ingredients, how much care you take in toasting and charring everything.

Chiles get toasted but not charred, same with spices. Onions, tomato and garlic gets charred. Hard. As in lots of blackening. You might also want to season everything with smoked salt in this dish, as the smokiness adds a lot.

I used grouse stock to make my pipian, because, well, I have a lot of odd stocks lying around. If you don’t, go with chicken or vegetable stock.

Since I was serving this pipian rojo with a pine nut-eating squirrel, I used pine nuts I’d gathered. You can of course use store-bought pine nuts, but you can also sub in peanuts if you’re on a budget. You do need sesame seeds, though.

Traditionally you would braise whatever meat or fish you’d serve your pipian with in the sauce itself, but I find this dulls the flavor a lot. So I cook all my Mexican sauces minimally except for the deep, dark moles you see in Mexican restaurants. Those are better long cooked. You can do whatever you’d like.

If you do go my route and braise separately, do this:

This is one of my all time favorite Mexican sauces. I like it even more than most moles, although my turkey mole is pretty damn good. 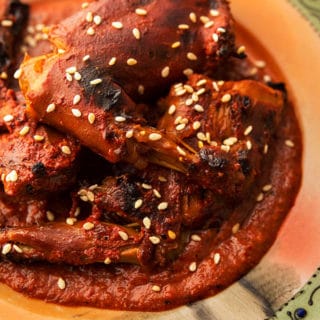 This is a classic Mexican sauce that hinges on red chiles and various nuts and seeds. I served it over squirrel in the picture, but any lighter meat is a good choice: pork, chicken, turkey, and even fish or shrimp. Pipian rojo keeps for a week in the fridge and freezes well.
Prep Time1 hr
Cook Time10 mins
Total Time1 hr 10 mins
Course: Sauce
Cuisine: Mexican
Servings: 8 people
Calories: 127kcal
Author: Hank Shaw