After I got my first-ever chachalacas in Texas, I went looking for a recipe that would highlight these amazing chicken-like birds: Classic sopa de lima from the Yucatan fit the bill.

Sopa de lima is essentially a hybrid between chicken soup and tortilla soup, spiked with the zest and juice of limas, which are themselves a hybrid of a citron and a lime. Yes, real deal sopa de lima is not a lime soup.

That said, it can be very hard to find real limas, even here in Sacramento, where we basically grow every sort of citrus there is. My advice is to use the smaller key limes if you can, and if not, a mix of Meyer lemons and regular limes is another good choice. Failing that, just use a regular lime.

I chose it because you can really taste the bird in this recipe, as opposed to some dish where the meat is covered up in chiles. It isn’t every day I get to hunt chachalacas, which can only be found in a few counties in Texas, if you happen to be north of the border. They are very common in Mexico and all the way down to Argentina.

The best way to make sopa de lima is to cook a whole bird gently in water, vegetables and some herbs, then pull the meat off the bones, strain the stock and make the soup from there.

You can make things a lot faster by using shredded leftover chicken (or any other white meat) and pre-made chicken broth. But you will notice the difference, so if you have time, it’s better from scratch.

My recipe for sopa de lima is an amalgam of one I found in David Sterling’s excellent book Yucatán: Recipes from a Culinary Expedition and another from a Spanish language cookbook called La Cocina Familiar en el Estado de Yucatan.

Once made, this soup keeps for a few days in the fridge, but if you want to freeze it, leave out the garnishes and add them when you thaw and reheat it.

I cook quite a lot of Yucatecan food, so if you like this recipe, you might want to try my rendition of cochinita pibil, poc chuc, which is grilled pork, dzik, which is a shredded venison salad, a stew called ajiaco, or a braised Yucatecan turkey dish I like to make with turkey thighs. 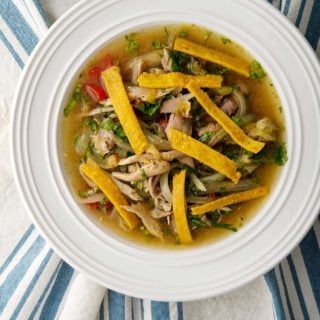 TO FINISH THE SOUP

NOTE: This will take a lot less time if you use leftover chicken and pre-made chicken broth.