If you learn no other jackrabbit recipe but this one, you could do a lot worse.

Basically this is a riff off my venison barbacoa recipe, but, interestingly, it’s based on a real dish in Sonora, Mexico. I happen to have a cool little book called Recetario Indigena de Sonora, a Spanish language collection of recipes from the indigenous people of the Sonoran Desert.

In this book is a recipe for barbacoa de liebre, or jackrabbit barbacoa. Makes sense, since the Sonoran Desert is the home of the largest jackrabbit in the Western Hemisphere, the antelope jackrabbit. This bad boy can grow to 10 pounds and is common in central southern Arizona all the way down to Nayarit, Mexico.

I got the antelope jackrabbits for this recipe on a recent trip to Arizona, and I made this recipe at hunting camp with Randy Newberg; we talked about jackrabbits on his podcast a while back.

And even though this is a jackrabbit recipe, you can use most red meats here. Yes, red. Jackrabbits have red meat, not white like actual rabbits. Don’t use rabbits here. Sub in lamb, goat, beef, venison, woodchuck, raccoon… you get the point.

Look at this jackrabbit recipe as a starting point. Once you have it ready, you will want to eat it as a taco, or in a burrito, or as the filling for tamales or any other filled dumpling, like bierocks, or Swedish potato dumplings or potstickers. Or you can just serve shredded jackrabbit over rice or potatoes.

Me? I prefer it on real deal, Sonoran style flour tortillas. 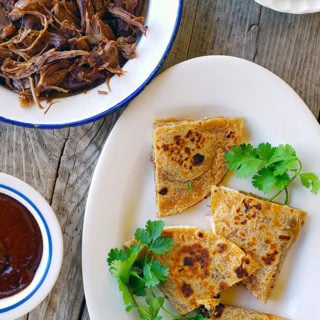 This is a variation on my Venison Barbacoa recipe, and you can feel free to tinker with it as you see fit. Use the shredded meat in tacos, burritos, over rice or in tamales. It will keep in the fridge a week and it freezes well.
Prep Time10 mins
Cook Time3 hrs
Course: Appetizer, Main Course
Cuisine: Mexican
Servings: 6 people
Author: Hank Shaw