I remember the first time I had a Southern tomato gravy: It was at my friend John Currence’s place, Big Bad Breakfast, in Oxford, Mississippi.

I was puzzled by it. Tomato gravy? In the South? At breakfast? Yes and yes.

Where I grew up, tomato gravy is Italian American slang for a tomato sauce, something not eaten at breakfast. Turns out Southern tomato gravy is simpler, homier and every bit as tasty as a good red sauce from back home in Jersey.

After that breakfast, I forgot about tomato gravy for a while. Then I picked up a fantastic Southern cookbook called Victuals: An Appalachian Journey, with Recipes. I can’t say enough about this book, and as a descendant of Scots-Irish immigrants myself, reading about the deep food culture of Appalachia was engrossing. I quickly set about making leather britches, a/k/a dried green beans, as well as fermented sour corn.

And there it was, Southern tomato gravy. Bacon, onions, tomatoes, a splash of sorghum syrup for sweetness. Lots of cracked black pepper. I resolved to make it this time.

Variations abound if you look around the South. You thicken it with cornmeal, flour or, well, nothing. Sometimes okra makes an appearance, sometimes herbs. You see dairy in it once in a while, notably sweet cream or evaporated milk. A few versions add stock. It can be smooth or chunky.

I love the one from Victuals. And while culturally it’s not Italian, philosophically it is.

A good Southern tomato gravy hinges on everything in it being good: Bacon, onions, tomatoes, syrup, and, most of all, black pepper. Similarly, there is a dish in Italy called cacio e pepe, which is little more than black pepper, cheese, maybe some olive oil, and pasta. It all comes together like magic if every ingredient shines. If not, it sucks.

Ditto with this gravy.

Bacon? Get the best you can find. If you don’t love bacon, use lard, or butter or duck fat, or fat rendered from a country ham.

Sorghum syrup is normally called for in this recipe, and while you can buy sorghum syrup online, it can be tough to find in most supermarkets. The first time I made this I used birch syrup from Alaska and it worked well. A dark maple syrup, British treacle, or a light molasses would also be good choices.

Tomatoes need to be either high-quality canned tomatoes, or ripe fresh ones. You don’t want paste or Roma tomatoes, either. The juice in this gravy comes from the tomatoes, so use beefsteak or Brandywine or some other large tomato that is really ripe, almost too ripe.

And for God’s sake grind your own pepper over this. Seriously. It makes a huge difference. You want a lot here, enough to taste the black pepper.

What to serve with your Southern tomato gravy?

All kinds of stuff. Grits, rice, cornbread, biscuits, any variety of meat or fish you can think of. I chose to make country fried dove breasts. Seems appropriate, since tomatoes are at their ripest when dove season hits throughout the South.

I can tell you that this dish was out-of-this-world good. Doves or no, make this tomato gravy. You won’t be sad. 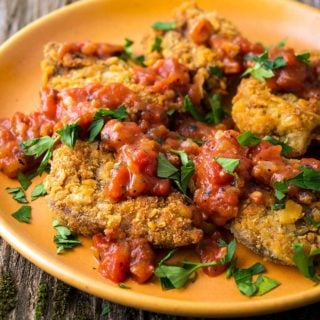 This is a basic Southern tomato gravy recipe inspired by the book Victuals, which I highly recommend. You can vary it in many ways I mention above, and serve it with most meats, fish or with a starch such as grits, biscuits or rice.
Prep Time20 mins
Cook Time45 mins
Total Time1 hr 5 mins
Course: Main Course, Sauce
Cuisine: American, Southern
Servings: 6 people
Calories: 297kcal
Author: Hank Shaw

NOTE: You can do this same thing with country fried steak, chicken, duck or goose, venison or pork. You want the cutlets pounded to about 1/4-inch thick or less.