It all started with Hank’s Dove Poppers, my version of the standard that uses a roasted green chile instead of the jalapeno, and roasted garlic instead of cheese. Then, after a great dove hunt in Yuma, Arizona, Holly and I stopped at Dateland, a little roadside stop that features date shakes — my favorite kind of milkshake — as well as an array of various date products. I bought some medjool and honey dates.

I did so because I had an idea forming inside my head: A combination of dove and dates. Sweet and meaty.

The dish had to be a bacon wrapped dove popper, but I didn’t want it to be so one-note as just a date, a dove breast and a slice of bacon. It needed something more.

That’s when I remembered something my friend Johnathan O’Dell told me about Dateland: In 1927, it was designated as a place to grow dates by the King of Morocco when his country was threatened by a date blight. So seed stock from the highest quality Moroccan dates was grown there, and since then a small but significant date industry has grown in Arizona and SoCal.

Morocco. That led me to my marinade for the doves: chermoula. Chermoula is an herby, citrusy, spicy mixture often used to marinate fish or meats. It has many variations, but any version would add a dimension to this dish. So I buzzed some chermoula together, marinated the dove breasts for a few hours, then built the poppers.

I settled on the small honey dates because they wouldn’t overwhelm the dove. Medjools are too big, so if that’s all you can find, cut them in half. I also left a lot of marinade on the doves, for added flavor. And I half-cooked the bacon, so the dove breasts wouldn’t overcook by the time it crisped on the grill.

The result: Exactly as I’d hoped. Fatty-smoky-crisp bacon, a soft and sweet date, and meaty dove laced with the bright, spicy marinade. Super good, fun to eat — but rich! I ate six and was full.

Make your bacon wrapped dove for a party as an appetizer. Oh, and if you have leftovers for some reason, they’re actually pretty damn good right out of the fridge!

I have 25 dove recipes here on Hunter Angler Gardener Cook, ranging from slow and low barbecued doves to dove enchiladas. Some great Labor Day grilling or barbecue options include: 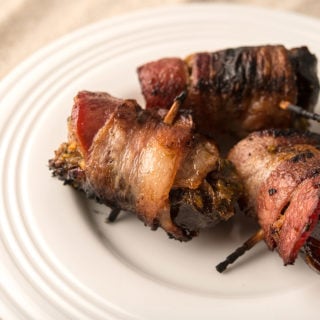 This is a take on the classic dove popper. A few tips: Make sure to use small dates or cut medjools in half or this will be too sweet. Marinate the dove breasts at least a couple hours, and up to overnight. And par-cook your bacon so the dove meat doesn't overcook; it should be medium to medium-rare.
Prep Time30 mins
Cook Time15 mins
Total Time45 mins
Course: Appetizer
Cuisine: American
Servings: 4 people
Author: Hank Shaw

Note that prep time does not include marinating time.
Tried this Recipe? Tag me Today!Mention @HuntGatherCook or tag #HankShaw!