Southern red eye gravy is one of those polarizing foods you either love or hate. I understand why because at its core, this gravy is nothing more than country ham drippings and black coffee. Harsh stuff.

Most cooks tinker with this base, however, and in my travels I’ve seen red eye gravy made in all sorts of ways — but always with that base of ham and coffee. Even I have two versions of this Southern classic on this site: I also have a chicken fried duck recipe with red eye gravy that includes a bit of tomato in it.

Here, my red eye gravy recipe has no tomato, and is very loosely inspired by a version I saw in Sean Brock’s book South: Essential Recipes and New Explorations, which is absolutely worth your money if you are into Southern food.

My red eye gravy recipe was born in an attempt to mitigate the harshness of old black coffee, which frankly, is nasty dumped into just ham fat. So I cook diced ham, remove it, then cook a shallot or onion, some garlic and 1 small hot chile in the fat, add some flour to make a roux, let that cook, then add coffee and broth, then, as one added touch, a spoonful of Southern sorghum syrup.

It’s an amazing gravy. Bracing, hammy, but still the gravy you know and love. It’s smooth, and is wonderful with everything from yes, slabs of country ham, to eggs and hash browns, chicken fried steak, potatoes and, in this case, some quail I sautéed in butter.

Red eye gravy will keep for a day or two in the fridge; thin it with water or broth or more coffee when you reheat it. It does not freeze well.

The only thing you absolutely must have to make any legit red eye gravy recipe (other than black coffee) is country ham. Don’t use the boiled hams you find in most supermarkets, or in a can. Dry cured, Southern ham is the soul of this dish. The only substitute worthy would be Spanish or Italian cured hams, which are different, but will do in a pinch.

As for the sorghum syrup, it too can be tough to find outside of the South. Some good alternates would be, in order, blackstrap molasses, British treacle, birch syrup, dark maple syrup, or dark brown sugar. 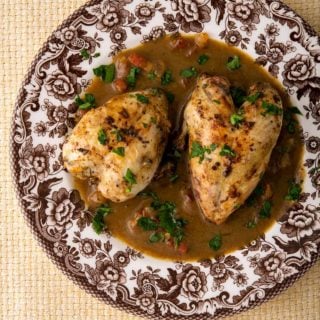 As for the quail, cook it according to my directions here. But the quail are secondary to this gravy. You can choose to puree this or not. I prefer it pureed.
Prep Time15 mins
Cook Time15 mins
Total Time30 mins
Course: Sauce
Cuisine: American, Southern
Servings: 6 people
Calories: 63kcal
Author: Hank Shaw