Mexican sopes are probably the best way to begin cooking with masa. These little tartlets can be made without a tortilla press, are easy to make — kids love making them — and can be filled with pretty much anything.

Here’s how to make them at home, and some suggestions on what to fill your sopes with.

Mexican sopes, pronounced “so-pays” or “so-pez,” are traditional botanas, or appetizers, and can be found all over Mexico. Always made from corn masa dough, they come in as many colors as there are colors of corn.

Sopes can be made with either fresh nixtamal or with masa harina, although they are better when made with fresh masa. And while you can make sopes with a tortilla press, I find that they are easier to pat out by hand.

Sopes are made in one of two ways, and each has its advantage.

The first, and probably oldest method, is to pat out a gordita, a fat tortilla, by hand and then cook it over medium heat on the comal — or flattop, or cast iron skillet or griddle — for roughly 1 minute per side, just to start setting the dough.

Then you pull the gordita off the heat and immediately use your thumbs and forefingers to pinch out a raised rim around one side. This is what makes a Mexican sope a sope and not some other masa shape. It’s easy enough, but it takes a little getting used to — that masa is hot!

Once shaped, the sopes can sit around until you are ready to fill them. When you are ready, you fry them in lard or vegetable oil until crispy on the outside.

The second method I see used more by Mexican chefs. In this method, you form the sope from raw masa, then they go right into the fryer to set. The advantage of this method is that you end up with a sope that has a taller, fuller rim. Th disadvantage is that this frying is a violent process, and you will lose a few sopes to it; they can rupture or form big air bubbles.

Here is a video I made of making Mexican sopes with the second method.

The more traditional comal method is more foolproof, but you will not get as nice a raised rim.

Once made, you really need to eat them within a few hours. In a pinch, you can let them sit a day in the fridge and then fry, or refry, them right before you serve, but Mexican sopes should be hot.

The only constant with Mexican sopes is the presence of beans, almost always refried beans. The reason for this is because refried beans serve as glue to keep whatever you put over them on the sope.

After that, anything goes.

That said, you will mostly see guisados on Mexican sopes. These are thick stews that can be more successfully eaten on a sope than in a taco, because the sturdy shell of a sope contains the juicy guisado better. Some good choices would be:

The pretty yellow masa sopes you see above are vegetarian, filled with a combination of fresh fava bean puree and my avocado-tomatillo salsa, plus sautéed quelites (wild, edible greens), caramelized onions and cotija cheese. Cilantro flowers make them fancy.

Those blue corn sopes on the tray are filled with refried black beans, real-deal carnitas Michoacanas — this is what all other forms of carnitas are based on — plus pico de gallo and hot sauce.

Your general rule for filling sopes is this: Refried beans + protein + salsa + queso fresco or other cheese + sour cream, if you want that.

Fish and seafood work in Mexican sopes, too, although whatever it is needs to be chopped small or flaked so you can eat it.

And that brings up the issue of size.

Roughly 45 to 50 grams is what you are shooting for, or about the size of a golf ball. 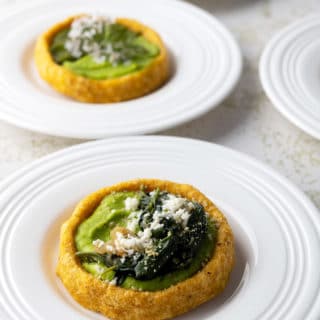