Chances are that if you are not from Mexico, New Mexico or Texas, you aren’t familiar with carne guisada.

In Mexico there is an entire category of taco fillings called guisados, which are all basically thick stews you can eat with a tortilla. If you have not yet seen The Taco Chronicles on Netflix, you are missing out: There’s a whole episode on guisados, which, incidentally, are pronounced “gee-SAH-dohs.”

Texas has its own versions of carne guisada, and you will see it made with venison pretty often, at least in people’s homes. This is how I make carne guisada.

It’s origins are the quasi-famous caldillo durangueño, the signature dish of the state of Durango in Mexico. It’s normally made with chiles pasado, which I happen to make, tomatillos or tomatoes, broth, onions, garlic and either fresh or dried red meat, beef rump or carne seca that has been rehydrated.

Typically caldillo durangueño is a brothy stew, but if you let it cook down it becomes a thicker guisado.

Keep in mind that there is no absolute need to go through the labor of roasting, seeding, peeling and then drying your poblano or Hatch (Anaheim) chiles just to make this recipe. You can of course skip the drying step. But there is a noticeable difference between rehydrated chiles and fresh, and I like to mix the two here. It’s up to you.

There is one trick I use for the venison, or really whatever meat you use. When you cut it, use a piece of meat that has a definite grain to it. I like the hind leg roasts on a deer. Then, slice big chunks across that grain, then keep whittling the pieces down into taco-sized chunks, again against the grain. Doing this speeds up your cooking time and will result in meat you can bite easily without it pulling out of your tortillas.

Poblanos are a great choice for the green chile here, as are the various Anaheim/Hatch style chiles. My advice is to use mostly poblanos, then some hot Hatch chiles to get the heat to where you like it. If you are not familiar with the procedure to roast, peel, seed and stem your chiles, here is an excellent tutorial.

Once made, your carne guisada will keep in the fridge a week, and it can be both frozen and pressure canned. I do like this canned, so you can have wonderful tacos on a moment’s notice. 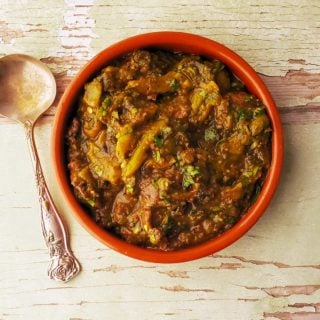 You can of course make this with other meats, but I prefer venison hind leg roasts. You can also eat this as a stew without tortillas if you don't cook it down all the way. If you are making tacos, toppings are up to you. I'd keep it simple: cheese, pickled onions, maybe a little pico de gallo.
Prep Time30 mins
Cook Time2 hrs
Total Time2 hrs 30 mins
Course: Appetizer, Main Course
Cuisine: American, Mexican
Servings: 6 people
Calories: 224kcal
Author: Hank Shaw