It’s taken me a while to write down a birria recipe. After all, this is one of the cornerstones of the cuisine of the Mexican state of Jalisco — and given that this is where most of the Mexican immigrants living here in Sacramento come from, I had every chance to get this one right.

So I ate birria. Birria as a stew, birria tacos. Lots of birria tacos. All over town. Dozens of places. My favorites, for the record, are Don Chuy’s and the now-closed Birrieria Bugumbilias.

What follows is me trying my best to give you a rendition of birria that is worthy of the name.

What’s the big deal? Well, in Jalisco, birria made from goat is what carnitas is to Michoacan, or cabrito al pastor is to Nuevo Leon, or cochinita pibil is to the Yucatan. In other words, a dish people take very seriously. Think chili in Texas or chowder in New England.

I know some of you are scratching your heads: What is birria, exactly? It is a lot like barbacoa or cochinita pibil in that it is seasoned meat wrapped in something and cooked largely through smoky steam until the meat falls apart.

You either eat it in a bowl, often in its broth, or shredded on tortillas for birria tacos.

Traditionally birria is made with kid goat, but you will see it made with adult goats, mutton, lamb and beef, too. As it happens, venison birria is especially good. You want to use the neck or front shoulder or shanks here, because they have a lot of connective tissue that, when cooked slow and low, melts and makes the meat silky.

You want to make the adobo for your birria and slather it on the meat the day before; this matters. Then, you wrap the meat in leaves — maguey leaves to be really traditional, but I use banana leaves — nestle it in a pot, then seal the pot you are using. Put the whole shebang in a low oven for most of the day, crack the seal and have at it.

And ideal set up would be to use the whole front shoulder or neck of a small deer or pronghorn (or a whole kid goat, or front legs from a lamb, or short ribs if using beef), cut in a away that they will fit into a Dutch oven. Wrap the marinated meat in banana leaves, which you can buy in any Asian or Latin market, stuff it all into the Dutch oven, put the lid on, and seal it with fresh masa, the corn dough you use to make tortillas.

Now, you may not have the ideal set up. You can get away with wrapping the meat in foil, but I would do leaves then foil. A good, accessible alternate leaf would be collards; they are sturdy enough to not dissolve in the long cooking. If you absolutely can’t find leaves, skip them and just use foil.

The dough seal really does keep all the moisture locked in, so use flour and water if you don’t have masa and water. It doesn’t matter. Just jam it all around where the lid meets the pot. You’ll need to crack it off when you are ready.

When will your birria be ready? Hard to say. But as a general rule, you err on the side of cooking it more, not less.

Birria cooked 12 hours will still be good, even if it got tender at 8 hours. I would not even think about cracking the seal in less than 4 hours, and for most small deer, 6 hours is a good benchmark. But since you will start losing some moisture once you crack the seal to check, I’m going a full 8 hours. Now if it’s a giant neck roast or something? Longer. Always longer, never shorter.

Your reward is that aroma that’s been sealed in, lots of amazing broth, and meat that falls apart, practically begging to be slathered on a fresh corn tortilla. Oh and yes, corn tortillas here.

Birria tacos are so good you will only want to top them with fresh cilantro and chopped white onions soaked in lime juice. Hot sauce is the only other thing you should consider adding, and really that’s to each eater’s taste.

Once made, your birria will keep a week in the fridge. Reheat it slowly in its broth for weekday lunches. 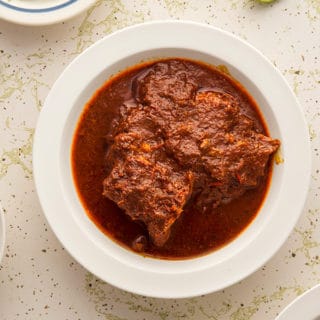 I use venison neck or should for this, but any front shoulder of a similar animal will do; goat is traditional. If you use beef, use short ribs.
Prep Time30 mins
Cook Time8 hrs
Marinating Time8 hrs
Course: Main Course
Cuisine: Mexican
Keyword: barbacoa, barbecue, goat, lamb, venison
Servings: 8 servings
Calories: 261kcal
Author: Hank Shaw

NOTE: If you have smoked salt, use that. It adds a nice touch to the meat.