I got an email from a reader a while back: “You should make a chile colorado recipe.” Well hell, I thought, that’s a great idea! Chile colorado, if you’ve never encountered it, is a pretty simple red chile sauce traditionally served over beef, venison or, less commonly, pork.

The origins of this sauce are unclear, but it seems to have come from the state of Chihuahua in Mexico, and has migrated up into New Mexico. There is a similar dish from Sonora called carne con chile, which I also like a lot.

“Colorado” here doesn’t refer to the state. Colorado in Spanish is, more or less, “colored red,” and is often used for blushing. I’ve also see it used specifically for the rich, dark reds of dried chiles.

For my chile colorado, dried, ripe New Mexican chiles are the most common pepper used to make it. Basically you soak dried chiles to soften them, grind them into a puree, season the sauce and simmer some tasty meat in it. Easy peasy.

There is a step you need to take to make a great chile colorado: Strain out all the stray bits of chile skin. They do not puree well unless you have a badass blender. Poorly blended sauce will result in flakes getting stuck in your teeth, generally making a nuisance of themselves. And remember, pepper skins are not digestible.

Now you don’t have to strain the sauce, but it will be a lot better if you do.

Some people toast the dried chiles first. If you want to, go ahead. Just do it quickly, lest you burn the chiles, which makes them bitter. You want to see a little puffing up, not scorch marks. So do it over medium heat.

And you need not restrict your chile colorado sauce to this dish. It is a pretty good catch-all sauce, good for enchiladas, tamales, etc.  I’ve had it with beef, pork and chicken at restaurants, so there is really no reason not to cook anything else in it: pheasant, turkey, bear, venison, duck — your imagination is your only limit.

And if you’d rather go green, the other big New Mexican stew is green chile stew, which, obviously, uses unripe, green chiles. 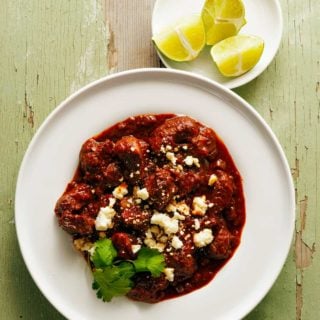 Chile colorado is a red chile sauce seasoned with a little cinnamon and Mexican oregano, and thinned with a little broth. There are many, many variations on this sauce, so use this recipe as a guide. One tip: Don't use overly hot dried chiles, or the stew will become inedible. If you want more heat, add it with hot sauce at the end. The sauce stores really well in the fridge, so if you make a big batch it will keep.
Prep Time30 mins
Cook Time3 hrs
Total Time3 hrs 30 mins
Course: Main Course
Cuisine: Mexican
Servings: 8 people
Calories: 283kcal
Author: Hank Shaw