There are lots of ways to make empanadas, but my favorite is with a wheat flour-based dough that is then fried in oil or lard. Low fat? Nope. But fried empanadas are craveable snacks or appetizers you’ll want to learn how to make. Here’s how.

The key to fried empanadas is learning how to make a good empanada dough for frying. It’s a lot different from my masa empanadas, where the dough is solely corn masa, as well as, say, puff pastry empanadas, which are always baked.

Another difference is the flour. It is a lot less important to use a soft wheat flour like Sonoran or Lily flour for empanadas than it is for flour tortillas. Any all-purpose flour will work.

Many recipes ask you to roll out dough and cut circles with something to make your empanadas, but I find that wasteful and, well, just harder than it is to make your dough, measure out balls about 50 grams, which is a little less than 2 ounces, set those balls in a plastic bag for an hour or two, then using a tortilla press to make perfect rounds every time.

The rest time lets the gluten in the empanada dough relax, which allows you to make the rounds with a press. If you don’t wait, they will contract dramatically.

You can find tortilla presses in pretty much any Latin market, as well as online. I am partial to this tortilla press from Masienda, although admittedly it’s expensive. Just make sure whatever kind you buy, it’s heavy. Iron, not aluminum.

Also keep in mind that while this is an empanada dough for frying, it will work if you decide to bake empanadas instead. You will want to mix a beaten egg with 1 tablespoon of milk or cream and brush that on top of each empanada, so it will get pretty and golden.

But let’s face it: Fried empanadas are better. They just are — if you fry them correctly.

That means using enough oil or lard so they will float in it (you can strain and reuse the oil several times, so you don’t waste it) and that oil needs to be at least 325F, and 350F is better. Oil that is too cool will make your fried empanadas greasy and sad.

I normally use canola oil for fried empanadas because it’s flavorless and has a high smoke point. Lard tastes better, but you end up frying very close to lard’s smoke point, which is tricky; when oil gets too hot it will taste acrid.

Up to you. Really. Anything goes.

Chorizo and potatoes is classic, but leftovers are the classic filling for empanadas. Just be sure to chop whatever the filling is small, because you don’t want to tear into one and have a big chunk of your filling pull out with one bite.

Here are some recipes that would be good as fried empanada fillings:

I’ve also made fantastic empanadas filled with smoked or shredded fish or crab, as well as mushrooms and other vegetables.

Empanadas are quite possibly the perfect make-ahead food.

First off, they are usually delicious cold or at room temperature, so carrying a few on a fishing trip, a hike or in the deer stand is always a good call. Many cultures have this sort of “hand pie,” and I have recipes for venison pasties and Appalachian squirrel pies elsewhere on this site.

But if you do want to reheat fried empanadas, you can of course simply refry them for a couple minutes. That re-crisps them really well.

Popping them in a toaster oven at 350F for 15 minutes or so will do the trick, too. 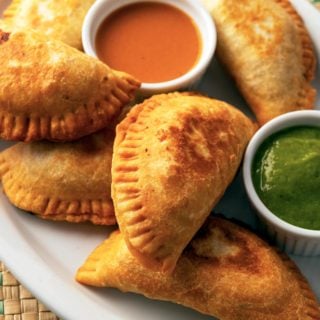 This is largely how to make empanada dough for frying, since the filling is really up to you. Whatever it is, you will need about 1 pound of it. Once made, these empanadas will keep in the fridge a week, and they freeze well.
Prep Time30 mins
Cook Time30 mins
Resting Time1 hr
Total Time2 hrs
Course: Appetizer, lunch, Snack
Cuisine: American, Argentinean, Mexican
Servings: 12 servings
Calories: 238kcal
Author: Hank Shaw

If you want to play around with flours, start by replacing the regular flour with 1/2 cup of your alternate. I like using acorn flour, barley or rye, chickpea, etc. Different flours will change the flavor and color of the empanadas.