When I am on the road, I get asked on a daily basis what my favorite recipe is. It’s a ridiculous question considering how much I cook, but I try to answer as best I can. And that answer always comes down to this: My favorite recipes are those that bring together elements of that hunting or fishing trip onto the plate. These squirrel pies fit that bill.

Here’s the story. When my book tour hit Ohio, a reader — who is now a friend — name Jeff offered to take me out squirrel hunting near Mansfield, just north of Columbus. It was raining softly, which was a good thing. A little moisture lets you walk through the forest more quietly.

Squirrels, being smart, know this of course, and were their usual wily selves. Think I’m joking? Try hunting squirrels in a place where they are hunted. They are fiendishly elusive, and utterly unlike the park squirrels you may know best by their habit of begging for peanuts.

Still, Jeff and I are not new to the pursuit of tree ninjas. Using an heirloom .22 rifle, Jeff managed the first two squirrels of the day. I missed one, which was more than a little annoying, as the squirrel was right there — but managed to get the drop on another in a little patch of pine. My first bushytail of the season.

We ended up with six that day, which in my book is a decent day in the squirrel woods. What was I going to cook with them, Jeff asked?

An idea formed in my head as we drove to dinner that night. All around me during the hunt were crabapples, oaks and black walnuts. These ingredients I knew would need to be in the dish.

I definitely did not want this recipe to be fancy. First, it’s a squirrel, for cryin’ out loud, and second, going haute cuisine didn’t seem right in Mansfield, Ohio. So I decided to make a squirrel pie, with acorn flour in the dough, and black walnuts and apples in the filling to go along with shredded squirrel meat.

And since I am fond of hand pies — empanadas by another name — I decided to make them instead of a larger pot pie.

I modified a dough recipe for venison hand pies I read in Ronni Lundy’s great cookbook Victuals: An Appalachian Journey, with Recipes. (If you’ve noticed I’ve been inspired a lot by this book lately, you’d be correct. It’s my current favorite cookbook.) Then I improvised a filling, extremely loosely based on Ronni’s hand pie recipe.

The end result is wonderfully woodsy. You can taste the acorns in the dough, the squirrel meat shines through well, and the apples and cabbage play a good backup. Our second version of this used the same filling but added shredded gruyere cheese, which I think was even better.

Black walnuts are what I use, and you can buy them in many markets in fall. Use regular walnuts if you prefer. And I happen to have acorn flour lying around — here’s how to make it — but you can sub in any nice flour. Spelt, whole wheat, emmer, chestnut, etc.

And yes, if you are skeeved out by squirrels, use some other meat. Rabbit, chicken, pheasant, whatever. 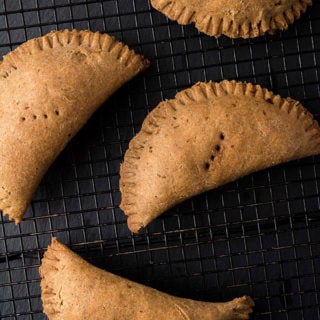 There are a number of hacks and subs you can do here. First, you can use any white meat for the filling. Rabbit, turkey, pheasant, quail, partridge and yes, chicken would all be fine. Next, you can skip the acorn flour and just use a whole wheat or some other darkish flour your like. Third, you can use regular walnuts for the black walnuts... or use whatever nut makes you happy.
Prep Time15 mins
Cook Time25 mins
Resting time2 hrs
Total Time40 mins
Course: Appetizer, Snack
Cuisine: American
Servings: 9 pies
Calories: 423kcal
Author: Hank Shaw

NOTE: I start with meat shredded off squirrels used in making stock. You can do this, or braise squirrels in salty water until tender, or you can just cut meat off the bones of raw squirrels and chop that up. All methods will work.