Mincemeat pies are a fun holiday treat that will surprise everyone with how good they are. These are venison mincemeat pies — and yes, long ago, mince pies did indeed have meat in them — made with a Scottish flair.

Everyone knows the term mincemeat, and, technically speaking, it’s just a British term for what we Americans call ground meat; mince is another term you’ll hear over there. I grew up calling it “chop meat” in New Jersey.

Most people also “know” that mincemeat pies don’t have meat in them. They’re largely correct, as the standard mincemeat pie recipes over the past century have largely skipped the meat.

But venison mincemeat pies have an ancient heritage, dating to the 1100s even. During the reign of the Tudors — think King Henry VIII — in the 1500s, mincemeat pies included meat, and it was often venison.

The pies also got smaller over time, and this gets into my recipe for venison mincemeat pies. I love them as little personal “pie-lets,” teeny three- or four-bite wonders. And they are wonders, as I’ll explain in a moment. But to do that I went out and bought a mincemeat pie pan for $20 online.

Lest you think this is crazy, a) these pies are worth the effort, and b) you can make jam tartlets with the pan the rest of the year.

You do have to get over the meat + sweet thing, but chances are, if you don’t tell someone that there is actual venison in their venison mincemeat pies, they won’t notice.

Why? Because you make the filling with almost equal portions of fruit and meat and fat. This gives the filling oomph without it screaming, “I’m chopped deer meat!”

I highly recommend you make these little mincemeat pies if you can, even with a cupcake tin if that’s what you have, because that ratio of pie crust to filling really shines with a small pie.

Most recipes will have you add raisins, sultanas, and “currants,” which in this context are actually still raisins. Go figure. Boring!

Instead, use dried berries. Several kinds if you can get your hands on them. This mincemeat recipe has dried lingonberries, dried blueberries and dried black currants. The real kind.

Other options that are good are chopped, dried apricots and dried blackberries, gooseberries, raspberries, huckleberries, mulberries or dewberries.

The one traditional mincemeat pie fruit I do use is fresh, grated apple. I use a granny smith, but any baking apple will do.

Spices and the Filling

The history of mincemeat pies holds that the originals were made with lots of spices the crusaders brought back from the Middle East, and you still see that today. Cinnamon, clove, mace, nutmeg, and later allspice (a spice of the Western Hemisphere) all play a part.

The filling is all cooked together for a long time, then left to cool a bit, then, traditionally, mixed with brandy or rum. I, being of Scottish descent, use Scotch instead. Ideally you then refrigerate the venison mincemeat for, well, a while.

Its acidity, fat and salt content and the presence of hard liquor all help preserve the filling for weeks, even months. It is said to improve over time, to the point where some cooks make their mincemeat pie filling in October or November for Christmastime.

But yes, you can absolutely just make it, let it cool and fill your pies with the fresh filling, too.

Any decent pie crust, even store-bought, will work.

My recipe, as well as the inspiration for the filling recipe, is from the excellent book by Ben Mervis, The British Cook Book. It’s a pretty simple pie crust, only it adds an egg, which is unusual, at least in my experience.

You could use puff pastry, but that’s not traditional, and you could even use a British hot water suet crust, like you would in a game pie or pork pie.

Once made, venison mincemeat pies will keep about 10 days or so in the fridge, but it’s unlikely that any will be left after that long. You can freeze them, too.

To reheat, remember they’re already cooked, so a toaster oven is ideal. Maybe 10 to 15 minutes at 375F will do. I do like these pies at room temperature, but not actually cold.

Other Meat Pies to Try

I have a wide selection of other fantastic meat pies you might want to try. Some are bready, others use pie crust, some use other doughs. Keep in mind the filling meat can really be whatever you have lying around. 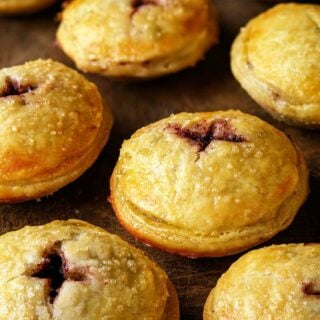 This is an old school rendition of a British mincemeat pie, using meat and dried berries instead of raisins. I include a pie crust here, but you can use a store-bought crust if you want.
Prep Time3 hrs 45 mins
Cook Time30 mins
Total Time4 hrs 15 mins
Course: Appetizer, Dessert, Snack
Cuisine: British
Servings: 12 servings
Calories: 355kcal
Author: Hank Shaw

You can use 125 grams of butter instead of mixing the fats. That equates to 9 tablespoons of butter. You can also use lard or Crisco instead.