Mexican picadillo is to Midwestern “taco meat” what the sun is to a flickering match. It’s easy to make, quick, and so, so much better than ground meat + McCormick’s mild taco seasoning, or whatever it is they put on “taco meat.” This picadillo recipe is from Sonora, in the north of Mexico, and is fantastic over rice or with flour tortillas.

Picadillo, for much of my life, was simply a pretty, sing-song word that I vaguely associated with Latin food. I knew that pretty much every Latin group that lived around me in New Jersey had a version: Puerto Ricans, Cubans, Dominicans… and yes, Mexicans. What follows is a Mexican picadillo recipe.

Growing up in New Jersey in the 1970s and 1980s, the sum total of Mexican food in my world was the Tiko Taco out on Route 22, and hideous, hard-shelled, pre-bent tacos filled with ground beef seasoned with “taco mix,” which, so far as I could tell, was cumin and chile and who-knows-what-else. Meh.

For a long time, I thought tacos = ground meat + seasoning. Even years later, Taco Night at college, or in friends’ homes (and here you can see I had no Mexican friends at the time), always meant “taco meat,” the same ground beef with seasonings.

Well, this concept didn’t spring from nothing. We were all trying to emulate Mexican picadillo without even knowing it.

Lots of versions of Mexican picadillo exist, and I am using the country as an adjective because as I mentioned, you can find picadillo in some form all over Latin America and Spain. Interestingly, most versions of picadillo are relics from the Renaissance, when sweet-plus-meat was a thing. You see a lot of raisins and sometimes dates, occasionally actual sugar, plus almonds.

If you are looking for that Mexican picadillo, which is more of a southern Mexican thing, you will find it here in my recipe for chile poblano rellenos.

What Exactly is Mexican Picadillo?

Picadillo in concept is something of a mash-up of Italian meat sauce and American chop suey, and Texas chili. Ground meat, with spices, usually some sort of tomato, but also a number of other vegetables tossed in for flavor and bulk.

There’s always a chile element, too. I’ve seen everything from cayenne, which is super gringo, to roasted green Hatch chiles — chiles verdes in northern Mexico — to jalapenos or serranos, rehydrated dried red chiles, even habaneros. You do you.

This version comes from Sonora, one of Mexico’s desert states, which borders Arizona. I am basing it off a recipe for venison picadillo in a cool little book called La Cocina Familiar en el Estado de Sonora, which as you might imagine is written in Spanish. The original recipe is credited to Balvanera Gonzalez de Cabrera.

What attracted me to her recipe was that it was a picadillo de venado — venison! I was also attracted by the fact that Gonzalez de Cabrera’s recipe is not sweet, and had far fewer ingredients than the sometimes baroque picadillos you can see in places like, say Oaxaca.

I then read a few other Sonoran picadillo recipes in Spanish, and watched a few videos of Sonorans making picadillo, and talked to a few Sonoran friends about how they make picadillo. This Mexican picadillo is an amalgam of those. Real “taco meat.”

How to Use Mexican Picadillo

Use it, of course, in tacos, but it is also a fantastic empanada filling, or mixed with eggs and stale tortillas for chilaquiles, stuffed in a burrito (especially a breakfast burrito), or even as the filling for a tamal. Mexican picadillo makes a helluva chile relleno filling, too.

There are a few tricks here for a better Mexican picadillo. First is to roast your own green chiles. I prefer to use Hatch chiles or poblanos, but Anaheim or chilaca or the Hungarian light green “wax” chiles will all work. And you can roast and peel red chiles instead. Don’t know how to roast your own chiles? Here’s how.

The other trick is to use roasted tomatoes and crush them yourself. You can sometimes buy pre-roasted tomatoes, and that’s fine so long as they are whole. Mexican picadillo really improves in texture when you have irregularly torn up tomatoes rather than a puree.

You can also slice a paste (Roma) tomato in half lengthwise and set it, cut side down, on a dry skillet until it blackens. By the time this happens, the tomato will be roasted and the skin will peel off easily.

Should you have leftovers, picadillo will keep in the fridge a week or so. It will freeze OK, but I wouldn’t use thawed picadillo for anything other than a filling you won’t see, like in an empanada or pasty. The reason is because thawed potatoes get mushy and a little weird. They taste fine, but it’s not as pretty. 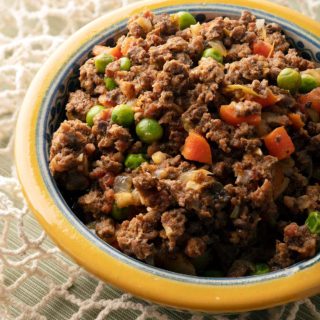 I use venison here, but really any ground meat works fine. I really like what lard brings to the party here, but then I use freshly rendered lard, not the shelf-stable crap. If you hate lard, use duck fat or olive oil. Once made, the picadillo will keep a week in the fridge.
Prep Time20 mins
Cook Time20 mins
Total Time40 mins
Course: Main Course
Cuisine: Mexican
Servings: 8 people
Calories: 283kcal
Author: Hank Shaw

Ground beef is the most common meat used in picadillo, but it can be pretty much anything.