Empanadas, basically a half-moon dumpling with something yummy inside, are common wherever Spanish is spoken; this recipe is for Mexican empanadas, made with masa instead of flour.

Masa empanadas are seriously good, especially when you fry them instead of baking them. And honestly, if frying empanadas freaks you out, this is not the recipe for you.

Let’s start with what is masa? It’s corn meal that has been nixtamalized, a chemical process that sloughs off the hard pericarp of the corn, making more of its nutrition available and changing its flavor, in my opinion for the better. You do this with an alkali solution to change the pH of the water in which the corn cooks.

I am admittedly hardcore. I buy real Mexican corn from Masienda, nixtamalize it myself, grind it and make these Mexican empanadas with it. I will walk you through how to do this, but I want to state at the beginning that you can absolutely make masa empanadas with masa harina, which is nixtamalized corn, ground and then dried into a fine meal.

Most people know it as Maseca, but that’s a brand name, and while it is OK, easily accessible and cheap, I’d suggest buying masa harina from Masienda instead. (And no, they are not paying me to say this. I just like their products.) It’s made from good corn that still has a lot of flavor.

OK. If you want to know how I make masa for empanadas, here goes:

Now you have your dough. Yeah, I get it: it’s a process. This is why most people use masa harina. Here’s how to make masa harina from scratch, and here is an excellent store-bought brand of masa harina.

Why bother? The flavor is that much better. It really is. And I like the slightly more rustic grind you get this way. It feels like what you might imagine “stone ground” cornmeal would be like.

What to fill your Mexican empanadas with? Well, anything, really.

Empanada fillings should be chopped small, and not be too hard. Masa dough is very fragile, so things like nuts can pierce it. And every empanada I know of is better with cheese. Grate or shred your cheese, whatever it is, and you’ll be in good shape.

Here are some recipes that would be good as Mexican empanada fillings:

I’ve also made fantastic masa empanadas filled with smoked or shredded fish or crab, as well as mushrooms and other vegetables.

How do you make a masa empanada? Very carefully. It’s not a joke. Masa dough is fragile before it’s fried, and you need to develop a touch for it. It took me two or three tries to get it where almost every empanada looks right.

First, you need a tortilla press. While I now use a spiffy hand-made one from Masienda, you will be fine with any cast-iron or wooden tortilla press; I also use this one. Can you make do without one? Sorta. You can squash your masa dough balls with a flat frying pan, but it’s dicey.

Your best bet is to fry your Mexican empanadas one at a time, as you make them. I make one, gently slip it into the hot oil, and make another while the first one fries. Set them in a warm oven to sit while you make the rest. They are best hot, but OK at room temperature.

Make a bunch of Mexican empanadas at once. They store for a week in the fridge, and, once fried, freeze well. To reheat, put in a toaster oven at 350°F for about 12 minutes, or refry for 2 minutes.

There is a reason masa empanadas are my favorite: The corn flavor really shines, the fillings seems to go so well with it, and even though they are fried, Mexican empanadas seem lighter than those made with pie dough or bread.

Give them a go. It is a skill worth learning!

If you’re interested in meat pies from around the world, try my Cornish pasties, Finnish meat pies or Sicilian meat pies. 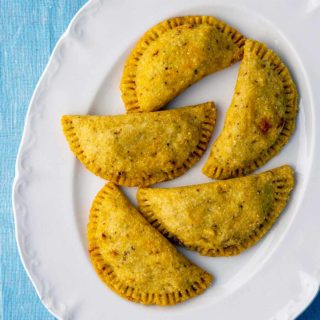 These are masa empanadas, which you can fill with whatever you like. Below are instructions on how to make them with masa harina; instructions for handmade nixtamal are above.
Prep Time1 hr
Cook Time30 mins
Total Time1 hr 30 mins
Course: Appetizer, Snack
Cuisine: Mexican
Servings: 10 people
Calories: 125kcal
Author: Hank Shaw