When I set out to develop a shrimp empanadas recipe, I really wanted to get a flavor of the Gulf of Mexico, home to some of the best shrimp in the world. I found inspiration in an obscure recipe for shrimp empanadas from the Mexican state of Tamaulipas. I think you’re going to love it.

What sets this recipe apart from virtually all the other recipes I’ve seen for shrimp empanadas is the dough: It’s made from plantains, those starchy banana cousins called platano macho in Spanish.

You see plantains used in lots of ways in the Gulf and even moreso in the Caribbean. Here they are used, along with masa harina, as an exceptionally tasty crust for these empanadas.

The filling for these shrimp empanadas is very Gulf-Caribbean, too. You see heavy Spanish influence here, and in this recipe that means olives and a classic sofrito of onions, garlic, tomato, olive oil and chile.

Obviously you’ll want Gulf shrimp if you can get them, but really any shrimp will work, as would crawfish tails, chopped lobster bits or crabmeat.

OK, I won’t lie: The plantain dough is a little trickier to manage than, say, my standard dough for fried empanadas. But it is no harder to manipulate than the 100 percent masa dough for my Mexican empanadas, which, given that these shrimp empanadas are also Mexican, really ought to be called “masa empanadas.”

You can use underripe plantains, the green ones, but I prefer yellow ones — don’t use plantains that are black, which, while very sweet and nice for dessert, will have too much of the banana’s starch turned to sugar. And that’s a problem, as we’ll see in a moment.

You cook the plantains until they’re soft, then mash them with masa harina to make a dough. It’s a lot like making gnocchi dough with mashed potatoes and flour.

As for the masa harina, I make my own. And while yes, you can of course use the ubiquitous Maseca brand, it’s terrible. Bob’s Red Mill has a good yellow one, as does Masienda.

Yellow is best because the plantains will be yellow, and it makes a prettier dough. White masa harina is fine, though. Don’t use blue. It’ll look bizarre.

You should also know that plantain empanada dough browns fast — really fast if the plantains are blackish. It’s the sugar. So everything in the filling needs to be cooked because when you fry these shrimp empanadas, they cook up in a flash.

You’ll see my exact filling below, but there is no reason you can’t use the plantain dough with other fillings, sweet or savory. The only caveat is that the filling needs to be minced fine because the dough is very soft, and so hard things can pierce it.

So something like my picadillo recipe is perfect, as would pumpkin filling, or Mexican chorizo with cheese, or refried beans and cheese would all be good.

Also, if you have them around, those little boreal shrimp from northern waters work really well for shrimp empanadas. They’re usually sold cooked and shelled. 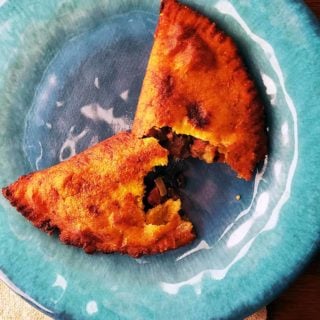 These empanadas are best right out of the fryer, but they’re still good at room temperature. If for some reason you have leftovers, they are best reheated in a toaster oven or by re-frying for a minute or two.