Jerky, the ultimate meat snack. Beef leather. Chewy, savory, spicy, sweet, it’s my favorite thing to gnaw on when I’m on the road. Making your own deer jerky at home is a snap: Slice, marinate, dry, eat. You’re going to love this venison jerky recipe, which was praised as the “One Jerky to Rule Them All” by Petersen’s magazine. It’s won lots of awards.

Here are a few tips and techniques for making really good deer jerky.

I’ve made venison jerky a lot in recent years, and I’ve come to learn that nuances matter. How thick do you slice the meat? Across the grain or with it? What do you marinate it in? Or do you do a dry cure instead? How long is enough? How long is too long? Dry in an oven, smoker or dehydrator? Again, how long?

This deer jerky recipe is the culmination of those years of tinkering.

Use hind leg roasts that are mostly free of sinew for a nicer venison jerky. If you use gnarlier cuts, you will be chewing a long time.

Slice thickness determines whether you will have chewy jerky or the really brittle stuff you need to moisten with your saliva before you can even begin to eat it; this latter stuff will last forever at room temperature. The thicker jerky is more fun to eat, but doesn’t last as long.

Either way, if you can slice your venison partially frozen, it will make things easier.

Slicing your venison across the grain makes it easier to tear with your teeth, but the shorter strands are a little less satisfying as you gnaw them. Slicing with the grain can make for a challenging chew, but the fun lasts longer this way; African biltong is cut with the grain. 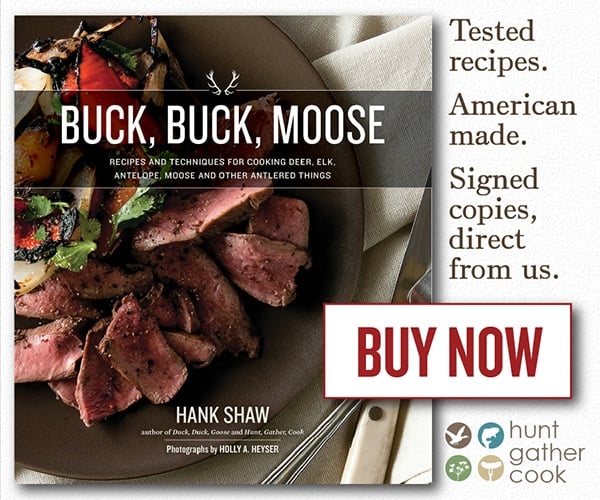 Pretty much every deer jerky recipe uses a marinade of some sort; the exception is the simplest of all jerkies, Mexican carne seca. Brining, marinating or dry curing is virtually freestyle. So long as you have ample salt (or something salty, like soy or Worcestershire) you’re in business.

Long-time readers of this site know I am not normally a fan of marinating meats because marinades penetrate only about 1/8 inch into the meat per day. See my article on venison marinades for more on this. (Most of those marinades will work for jerky, incidentally.)

But considering that I slice my venison jerky thin anyway, marinating works here. How long? Longer than you think you might need. Seasonings in jerky tend to fade a lot with the drying process, so you really want them to get in there. 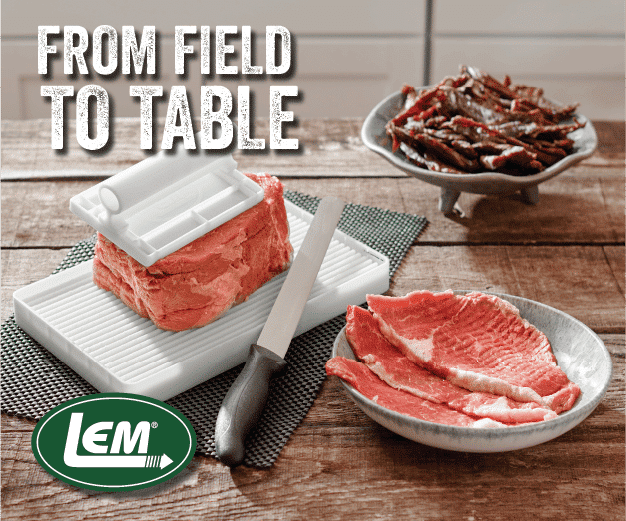 As for the drying process, a dehydrator beats an oven hands down. Even a low oven cooks the meat a bit too much, leaving it crispy. Of course, if you like crispy, go for it.

I prefer to dehydrate my deer jerky at about 145°F to 155°F. This leaves the meat in the danger zone for bacteria at the outset, so I use Instacure No. 1

, which protects the meat as it slowly cooks in the dehydrator. You don’t need this if you use an oven. And you can skip the curing salt if you dehydrate hotter, at about 160°F.

You can also dry your venison jerky in a smoker. Set it as low as it will go, 165°F in my Traeger, and use whatever wood makes you happy. For this recipe, I prefer mesquite. (I also have a smoked venison jerky recipe specifically designed to be smoke-dried.)

Through a lots of trial and error I’ve come up with this, my favorite deer jerky recipe. It’s not complicated, which is a bonus, and it really packs a lot of flavor into the meat.

The key to this is the chipotle in adobo. Don’t worry, it sounds more esoteric than it really is. It’s basically smoked jalapenos canned in a rich, spicy adobo sauce. There are several makers of this magical stuff, and the little cans are widely available in Latin markets and in really any supermarket that has a “Hispanic” section. If all else fails, you can buy chipotles in adobo online.

You mix them with soy sauce, onions and garlic, a little sugar and let it sit in the fridge for up to two days. The longer the venison marinates, the spicier and saltier it will be. I let the deer jerky marinate for a day.

Don’t rinse off the marinade, just wipe it off with a paper towel, then dehydrate or smoke until it’s dry, but still bendable, usually about 6 hours.

The end result is a chewy, slightly thick deer jerky loaded with an almost “spicy BBQ” flavor. It’s an addicting flavor — I ate three pieces one after the other, unconsciously, as I was trying to evaluate the flavor. That instinctive taking another bite is always a good sign.

Want to do a different route? Use my duck jerky recipe and substitute venison. Works great.

If you want to try another flavor of jerky, use my duck jerky recipe and sub in venison. I also have a great smoked venison jerky recipe.  This recipe makes about 3 pounds of finished jerky.