If you are looking for a foolproof elk roast recipe, you’ve found it. The secret is to reverse sear the roast slowly, then finish over very high heat — and this method works with any large roast, not just elk.

First off, as you can see, this elk roast recipe deals with hind leg roasts here, not front shoulder roasts. Those are much better cooked as a venison pot roast, or Mexican barbacoa, or with my nifty shoulder recipe inspired by Senegalese cuisine.

The reason is because you will want to eat your roast rare-to-medium, like roast beef. And to do that you need big muscle groups largely free of connective tissue. (I have a very detailed tutorial on how to butcher deer and elk in my cookbook Buck, Buck, Moose.)

How to Cook an Elk Roast

A major problem people have with large roasts like this is the “black and blue” effect, where the outside is well browned and pretty, but the center is raw, the outer layers gray and sad. The answer is to reverse sear the roast, either in an oven or, better yet, a smoker.

Keep in mind that this is not simply an elk roast recipe, it is a recipe and method for all large, red meat roasts. So beef, moose, deer, oryx, nilgai, large sheep (wild or farmed), caribou, musk ox, etc.

As you can see from the smoke ring on the meat in the photo, I used a smoker. This recipe is different from my recipe for a fully smoked venison roast in that this is salted shortly before you start cooking, and the smoking only takes you part of the way towards doneness. And of course you need not smoke your roast at all. An oven works fine.

The finish here is in an oven set as high as it will go, ideally 550°F. That gets you a nice crust on the outside.

To pull off this recipe, you need a probe thermometer. The Traeger I use comes with one, but you will want a thermometer that gives you a constant read of the temperature at the thickest part of the roast. You pull the meat when it hits your target.

That target temperature should be way lower than what you want when you eat your elk roast, because a) you are going to sear the meat, and b) large roasts have major carryover heat.

Roasts are the ultimate vehicle for carryover heat because they are often very large — this elk roast was more than 6 pounds — and they are kinda-sorta spherical: The closer an object is to a sphere, the more profound its carryover heat will be.

Temperature is another major factor. You don’t really get a lot of carryover heat when you cook at low temperatures; the “stall” in barbecue is related to this. That means that by reverse searing your elk roast, you avoid drastic carryover until the end, which is good because it limits the really serious “gray ring” at the outside of a roast.

(Here’s a good article on the science of carryover heat.)

If you were to cook a roast at only high temperatures, the outside would be blasted to hell by the time the center was rare, even if you let the roast come to room temperature for more than an hour.

With this recipe, exactly when you take your elk roast out of the fridge depends on how you are going to cook it. If you are smoking it, you will want to go right from the fridge to the smoker. This extends the smoking time, and helps develop a better smoke ring, which you can see in some of these pictures.

You won’t get a smoke ring in the oven, so in that case it’s best to salt the roast and let it sit on a cutting board for an hour before starting.

I also coat my roasts in a little olive oil and then a sprinkling of cracked black pepper and cumin and/or coriander before they hit the smoker or oven. Just a little added flavor pop.

No matter how you are doing the slow roast, when the thickest part of your meat hits about 110°F, take it out of the smoker or oven. Jack your oven up as high as it will go, at least 500°F. If your oven won’t do that, maybe your grill will. Even 600°F isn’t too high here, so a pizza oven is a great idea.

Once your high heat is ready, return the roast to the fire and blast it for just about 10 to 15 minutes, a little less if you’ve got that pizza oven. All you want is a pretty crust on the outside.

This rest period allows heat to redistribute throughout the roast, resulting in a more even cook that, when you slice it, won’t release a gusher of juice — although even with a 15-minute rest you will lose some; just add that to the pan sauce.

If you are looking for some good pan sauces to play with while your elk roast is resting, try any of these:

After that, all you need is a nice salad and either bread or potatoes or some other starch to balance it all out.

For another use of this technique on a different cut (and species), check out my seared bison steak recipe and my Canada goose breast recipe. 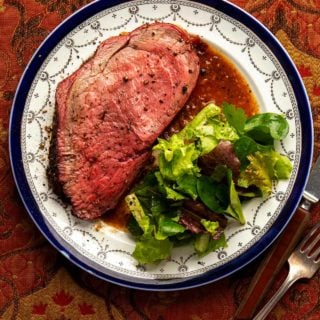 The 5 pounds for the roast is just as an example. See the headnotes for guidance on timing.