Cooking a bison steak is basically a hybrid between cooking a venison steak and a regular beef steak. There’s more fat on a bison steak than venison, less than beef. Here’s how to go about it.

If you’ve never eaten bison, it is very close in flavor to grass-fed beef, because, well, bison are, essentially, grass fed cows. Bison steaks can range from reasonably fatty to ultra lean. Fat marbling can happen, but it’s rare.

The flavor is rich but not greasy, and the fat, which is often yellow from all the grass the animals eat, is less creamy than in grain-finished beef.

In a perfect world, your steaks are at least an inch thick, and two inches isn’t too thick. Life is too short for wimpy, thin steaks. Leave any and all fat on them because unlike venison fat, which can be waxy, bison fat is delicious and won’t coat your mouth.

Ideally, you have yourself a dry-aged bison steak. Why? Because bison are leaner and older than a comparable cow. The one I butchered for all these bison recipes (like my bison brisket), was three years old, and they can be far older. An animal that old needs to be hung and aged longer than supermarket beef.

I happen to own a fancy Dry Ager unit, so I aged a rack of bison steaks for a month. Were I to age longer, I would need to smear lard over the exposed ends of the rack to prevent the meat from drying too much. We don’t want bison jerky in this case.

Always dry age on the bone if you can, so you can later slice steaks off the bone without loss. You can read more about dry aging in this detailed tutorial.

Lacking the ability to dry age your bison steak, you can and should still let your meat rest in the fridge for a couple days before cooking it. I lightly salt both sides, and this acts as a sort of cure, seasoning the meat all the way through.

The biggest difference between cooking a bison steak and a beef steak is fat — internal fat, to be exact. Like venison, bison has little or none. And fat is an insurance policy against error. It buffers rapid heat increase in the meat, giving you more wiggle room between rare and medium, medium and ruined.

So it’s trickier to cook bison steaks. And did I mention that they are expensive? Yep, typically a couple dollars a pound more than beef.

Ergo, we don’t want to mess things up. The closest to foolproof I’ve found is to reverse sear your bison steak. That means cook it very slowly in an oven or smoker until the center is close to where you want it, then sear the crap out of the outside at the end.

This method prevents crazy carryover heat that can make internal temperatures soar, and, if you have a smoker, makes an even better steak because you do the slow cooking under smoke. I do something similar with my elk roasts and Canada goose breasts.

The trick is to use a probe thermometer to monitor the internal temperature of the meat. You’re looking for about 120°F for steaks that will ultimately be medium-rare.

For smokers, any wood you like will do, but I prefer fruit woods like apple or cherry.

You can serve a bison steak straight up, seasoned only with salt and smoke, or add whatever makes you happy. My preference is to add freshly ground black pepper, maybe a pat of butter, and a sprinkling of chives or parsley.

You absolutely could serve a sauce alongside, like Cumberland sauce, prepared horseradish or either a green or a red chimichurri.

Mashed potatoes are a classic side, as is toasted crusty bread. And in summer I prefer a tomato salad, in winter roasted root vegetables. 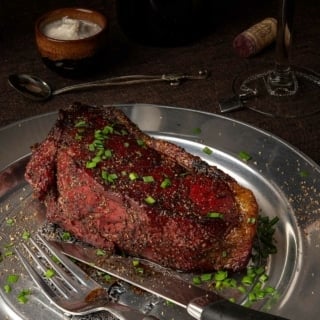