When you make a recipe with only a few ingredients, technique becomes more important. Such is the case with green chile stew.

Green chile stew is a New Mexico favorite, but you will see it all over the Desert Southwest, and there are versions of it across the border in Mexico, too.

Keep in mind, however, that this is not Mexican chile verde, which hinges on tomatillos and Mexican herbs and is, in general, made very differently, despite the dominance of green chiles.

Green chile stew is almost always made with either beef or pork; I used venison here. All of these meats are ideal, as would javelina, bison, elk, moose, lamb or mutton, or goat.

As you might imagine, variations exist with this recipe. Some use tomato; I do not. Some use either sweet or field corn; I do. Most, however, use potatoes, lots of roasted, peeled and seeded green chiles — Hatch (Anaheims) would be natural here — and all feature a touch of cumin, garlic and onions.

Some versions use no thickener. Some use a flour-and-fat roux. I use the old European technique of flouring the meat first, then browning. Over time, the flour in the pot that comes off the meat will thicken the green chile stew.

And thickness is your call, too. What I like to do is make the initial batch properly stewy, as you see in the pictures here. You eat it with a spoon and there is broth. Later, however, I will cook it down, and smash the potatoes and meat with a potato masher, and then it becomes more of a Mexican guisado, and in fact it is similar to my recipe for venison carne guisada.

Pro tip: Use this thickened, cooked-down green chile stew as a filling for empanadas, burritos or as a taco filling. Oh, and here you definitely want flour tortillas.

(I have a wonderful recipe for homemade flour tortillas here.)

About technique. You want to really take your time browning both the meat and the onions because it makes or breaks the stew. You will see renditions of green chile stew that are wan and pale. That tells you the cook was in a hurry, or he, for reasons known only to God, doesn’t like browned meat.

Also, you will want to determine how much you want to actually see the roasted green chiles. They will dissolve as they cook, so you will either have them as a ghostly presence in your green chile stew, or, if you put them in during the final 30 minutes, you’ll have them as a vegetable. Up to you. I do both. Mild chiles go in early, hot ones late.

(Here is a tutorial on how to roast green chiles, if you don’t already know how.)

Which chiles you use is also a judgment call. Ideally, you would use Hatch chiles from New Mexico. But Anaheims are the same basic variety. Poblanos are an excellent alternative, albeit more Mexican than New Mexican, but any large not overly hot green chile will work. And yes, in this case, you can use canned or dried. I really love using homemade chiles pasados, the dried, roasted chiles they make in Durango and Chihuahua.

Finally, corn or no corn? I really like using chicos, the dried corn that is common in the Southwest. It’s firm, even after long cooking, and starchy, not sweet. Use chicos if you can get them, otherwise simple fresh or frozen sweet corn is fine. Or leave it out.

Once made, your green chile stew will keep in the fridge a week. It can be pressure canned and frozen, too. 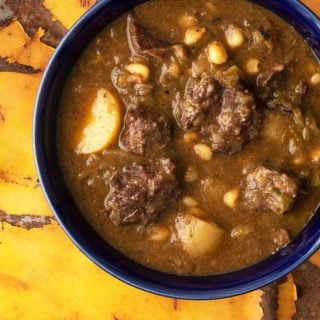