There’s something sexy about a well cooked shank. Silky, tender, and deeply flavored in a way only a well-used muscle can be. Most cooks work primarily with lamb shanks, and indeed, this is a Greek lamb shank recipe that I have modified for venison.

Before you stop reading, know that the difference between a lamb shank and a deer shank is basically about two hours; they are otherwise the same in the kitchen. Deer, being athletes, run around a lot, and are often several years old, whereas lambs are, well, not athletes and are young. Thus the time difference.

I am using shanks from a whitetail deer I hunted in Oklahoma, and any deer shank will work as-is. If you are using very large shanks, like those from elk or moose or bear — or beef, for that matter, you will want to cross-cut them like I do for my ossobuco recipe.

My inspiration for this recipe is from a wonderful, if little known, cookbook by the great chef Michael Psilakis, called How to Roast a Lamb. It’s a classic Greek lamb shank recipe, with sturdy vegetables, lots of herbs and a little tomato and red wine.

The general procedure is to brown the meat in olive oil, then cook some vegetables in the pot, braise everything, then reduce the cooking liquid to serve as a sauce. This last step can take some time, like 30 minutes or so, which means if you are serving your shanks with mashed potatoes or rice, you can make them while the sauce is reducing.

A key to the flavor of the dish is to use a variety of fresh herbs. It brightens up an otherwise wintry, moody dish. I used a combination of parsley, dill and the leaves from the center of a bunch of celery. Other options would be fresh oregano or thyme, lovage, savory or fennel fronds.

There is one modification you’ll need to do if you are using venison instead of lamb: After you cook your vegetables in the olive oil, you’ll need to remove them until the meat is close to being tender — otherwise they will cook into mush. You don’t need to do this with lamb shanks.

Once made, this will keep for a week in the fridge, and it freezes well. My advice would be to debone it after the first night, then use it as a topping for mashed potatoes or rice later in the week.

If you are looking for other great recipes to make with a shank, try my Austrian braised shanks, shanks with lots and lots of garlic, Portuguese braised shanks or a Senegalese mafe recipe using elk shanks. 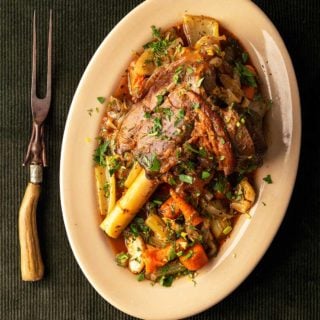