I must admit that when I first saw them, I wasn’t too keen on Swedish potato dumplings, called kroppkakor. Most were giant balls of potato, boiled. Meh.

And then I saw that kroppkakor are sometimes fried in butter or vegetable oil instead. Much better.

Typically these dumplings are filled with meat. Any meat will do, but to get super Nordic I used ptarmigan, a small, dark-meat grouse that lives in the colder places on this earth. More traditional, although I am betting that someone in Scandinavia makes kroppkakor with grouse, would be beef, pork or chicken. Generally you want lean, diced or shredded meat.

(I also have a lovely recipe for pan-roasted ptarmigan, too, in case you are looking for such a thing.)

I say lean because you mix whatever meat you are using with chopped bacon. Many times Swedish potato dumplings are filled only with bacon. That’s fine, too.

As for the dough, it is, more or less, like an Italian gnocchi dough, only you add eggs as an extra binder: Flour, mashed potatoes, eggs, salt and pepper. Unlike Italian gnocchi, you want this dough to be a bit sturdier so they don’t fall apart, so you add more flour. This lets you roll out the dough and cut it into shapes. It’ll still be soft and sticky, but a lot easier to work with than true gnocchi dough.

Once made, you can drop your kroppkakor into simmering water, but frying them in butter is so much better. After all, everything in the dumpling is cooked beforehand, so you don’t need to cook the hell out of them, just set the eggs. And, well, butter.

Serve your potato dumplings with horseradish cream, or, as I did, with lots of caramelized onions. Toss some tart berries, like lingonberries, wild blueberries, currants, or cranberries, into the caramelized onions right at the end to add some tartness to the dish.

Swedish potato dumplings really ought to be made and eaten right away. They don’t hold up well uncooked, and while you can fry them and them flash fry again a few hours later to reheat, allowing you to make a batch before your company arrives, they do not freeze well.

Incidentally, kroppkakor are an excellent accompaniment to my venison Swedish meatballs. 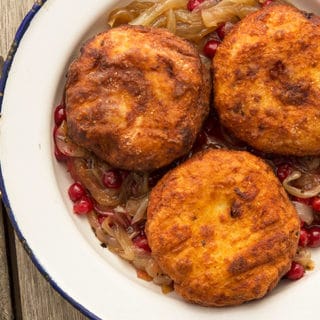 These are great appetizers for a party, as they come together quickly and are fun to eat. Fill them with whatever makes you happy. In this case, it's chopped bacon, shallot and shredded grouse. If you want to make caramelized onions to go with this, follow this recipe.
Prep Time1 hr 15 mins
Cook Time20 mins
Course: Appetizer, Main Course, Snack
Cuisine: Scandinavian
Servings: 8 people
Calories: 246kcal
Author: Hank Shaw