Originally from Spain, puchero is a big, hearty stew made in various versions all over the Spanish-speaking world, as well as in the former Spanish colony of the Philippines. This is a Mexican version, using venison — although beef is more common.

The word puchero means “stew pot,” and that’s what this is. Endless variations exist, and puchero is eaten in several different ways, too.

Traditionally, you would get a bowl or cup of the broth, and the vegetables and meat in another bowl alongside, very much like French pot au feu or Italian bollito misto. I’m not a fan of that presentation, but you can serve your puchero that way if you’d like.

Puchero is very closely related to Spanish cocido or olla podrida, and to be honest, I am not entirely certain what differentiates them.

Meat is a normal addition, and there is a version of puchero in Yucatan that uses three: chicken, pork and beef. Mine uses shanks from a nilgai I shot in Texas. Shanks, shoulder or neck are what you want here; cheap cuts with lots of connective tissue. Oxtail is another great choice.

If you are working with pork or a bovid — beef, bison, nilgai, blackbuck, oryx — you really want to try to get some marrow into your puchero. It adds needed fat and richness. I scoop it out after the bones have cooked a while.

The basic puchero recipe is to simmer meats until they are more or less ready, discard bones and extract marrow, then add the vegetables one by one.

This is an ancient, peasant stew designed for cheap cuts, very much like Portuguese feijoada or Kentucky burgoo or Virginia Brunswick stew.

So Many Vegetables to Choose From

The main difference between those stews and puchero is the size and presence — and importance — of the vegetables. You want to add them one by one so they are all just tender when you eat it.

This is not a “hammer it all day” stew like burgoo or Brunswick stew.

Mostly you want to use a selection of harder root-type vegetables like potatoes, carrots, turnips, etc, squashes of various forms, those chickpeas (canned or dried), something green, and corn.

You’ll note that the corn is still on the cob. I was skeptical of this at first, and did it only because really all the recipes do. My inner voice was like, “Sigh, this is going to make this hard to eat.”

I was wrong. By leaving the corn on the cob, the cobs add a touch of sweet to the stew, and when you pick up the pieces at the end and gnaw on them, it’s like a little dessert. I’m convinced.

Puchero in Mexico is almost always garnished with cilantro or mint, plus lime juice.

You’ll note that tomato is not on this list. For whatever reason, it’s rarely used in this particular stew, at least not in Mexico or Spain.

Once made, puchero will keep for a few days in the fridge. Reheat it gently, however, or the vegetables will turn to mush. 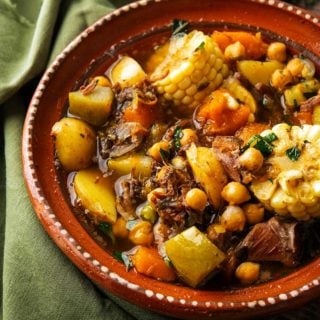 Note that all these vegetables are optional. See the post for lots and lots of other options. Basically use a lot, and use what you have.