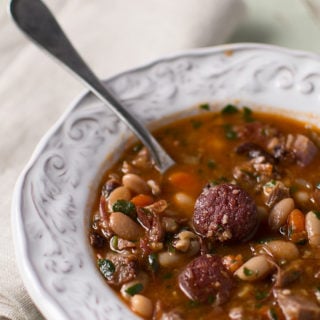 If you search this site, you will find several recipes for various versions of pork and beans, largely because I feel the combination is divinely inspired. Feijoada is a great example of this.

Most people are more familiar with the Brazilian version of this dish, but its origins are in Portugal, which ruled over Brazil for quite some time. The more familiar Brazilian feijoada (fay-zhwahd-duh) uses black beans, where the Portuguese one uses white or kidney beans — although I’ve seen it done here in California’s Central Valley with yellow canario beans.

Fascinatingly, there are versions of feijoada everywhere Portugal once ruled: Chinese Macau, Angola and Mozambique, Timor and Goa, and even Cape Verde. If anyone knows the details of what makes those versions unique, I would love to hear it!

However you make yours, the stew is a perfect cold-weather meal that uses various bits from the pig that most people throw away: feet, tails, ears, shanks, hearts, etc. You can make your feijoada as sporty or as tame as you’d like.

My feijoada recipe is pretty tame, although I really do prefer it with a trotter or two tossed in — it adds a lot of collagen to the soup, which makes it richer and thicker. Besides, you chop up all the meat and fat from the feet before you serve.

I made this version with various bits and bobbles from a wild pig I shot, but there is no reason you couldn’t do this with a domesticated pig. Go Latin or Asian markets to find things like pig’s feet, hearts, livers, fresh ears, etc.

If you can possibly find it, a nice Portuguese red wine is absolutely perfect with this stew.

This version of feijoada is a riff off Portuguese feijoada -- made with white beans, not the Brazilian version, which is basically the same only it uses black beans. Keys to this recipe are good beans and variety in the pork bits. The more various, the better. And you need something smoked in there, too. I used smoked hocks and/or smoked linguica sausages. Needless to say this stew keeps well in the fridge, and reheats beautifully. Serve it with rice or a crusty bread.
Prep Time20 mins
Cook Time4 hrs
Total Time4 hrs 20 mins
Course: Soup
Cuisine: Portuguese
Servings: 8 people
Calories: 805kcal
Author: Hank Shaw 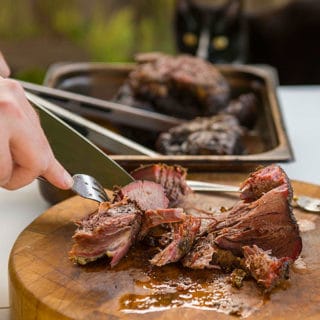 You can find lots of recipes for pork, wild or domestic, right here on Hunter Angler Gardener Cook.