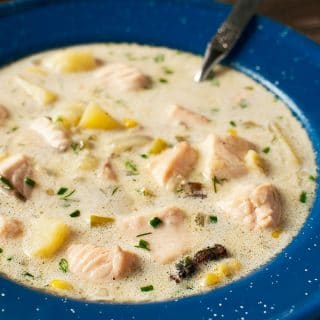 Ritual and tradition are powerful forces, both for good and for ill. Such it is with me and this salmon chowder.

I grew up eating chowder, all sorts of chowder, really, but my mom’s is the best. It is a brothy, Maine-style clam chowder that is always made from the same ingredients. always in the same way. Any deviation is apostasy.

Needless to say I developed a taste for that sort of chowder, no matter if it’s made with clams or fish or whatever. Sure, I like Manhattan “clam chowder,” but I view it as more of a perfectly nice clam soup than a proper chowder. There is also a Rhode Island style chowder with no tomato or dairy — also a lovely soup, but not a chowder.

There is, however, one incarnation of chowder I loathe: It is that hideous, gloppy monstrosity a particular set of New Englanders are known to concoct, mostly I suspect for Midwestern tourists. And I say “Midwestern” because I recently had a version of this chowder in Minnesota that was so thick you could stand a spoon in it.

My first tentative steps to break from tradition came with a perch chowder I designed specifically for the Great Lakes region. It’s made with yellow perch and Polish kielbasa and is damn good if I say so myself. This salmon chowder is my second step.

To me, chowder is different from soup in that it contains dairy products, in most cases cream or whole milk. Some are thickened with a butter-and-flour roux; mine are generally not. If you choose to thicken your salmon chowder with a roux, use equal weights of butter and flour; weight is a better way to do this than tablespoons. I’d suggest an ounce and an ounce. (If you insist on tablespoons, it’s about 2 tablespoons butter and roughly 3 tablespoons flour.)

I should start by saying that what you see in the picture is not, strictly speaking, a salmon chowder: It’s made with a steelhead trout. Steelhead is very close to salmon, although it is a little leaner and a lot paler (unless you are working with pink salmon, which is the same color). Any salmon, char or trout you feel like using will work here.

I live in Northern California, where the chinook salmon is king. This is the very southern end of its range, and what, ecologically speaking, could be called the Pacific Northwest — and it is the Pacific Northwest, with its vast salmon runs, trout in the mountains, steelhead in the rivers and char in the snowy North — where I drew my inspiration here.

So my salmon chowder has a salmon stock, bacon, corn, lots of herbs and a homemade stock. None of this would fly in mum’s clam chowder. I’ve even added chanterelle mushrooms, and it was a great choice; if you want to do that, add about 1 cup chopped or torn chanties.

Here’s the thing: People move West to escape tradition, to be free to be whomever they wish to be. Why can’t their chowder follow suit? 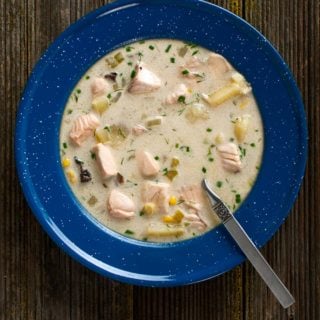 You can use any salmonid fish for this recipe... actually, you can use any fish -- except for something like sardines, mackerel or bluefish. Serve with crusty sourdough bread and a hoppy beer or crisp white wine. Oh, and this chowder is actually better the next day; just heat it up very slowly on the stovetop. Don't let it boil.
Prep Time20 mins
Cook Time1 hr
Total Time1 hr 20 mins
Course: Soup
Cuisine: American
Servings: 8 people
Calories: 409kcal
Author: Hank Shaw

Note that any sort of salmon or trout will work here.