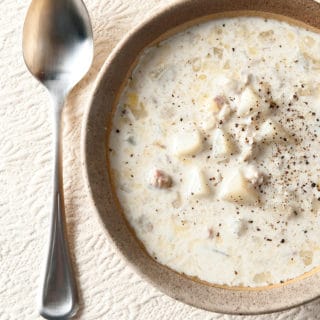 I can’t remember the first time I ate a clam. But I do know it was far earlier than my first oyster, or scallop, or mussel. And it was likely this Maine clam chowder recipe that’s been in my family for more than a century.

Clams are in my family’s DNA. My mom, after all, is a native of Ipswich, Massachusetts. And if there is a place more clam-centric than Ipswich, I can’t think of it; there is even a clam nicknamed the “Ipswich clam.” We know it as the steamer.

To me, clams mean vacation. Summertime. Happiness. I’ve written about my fond memories of digging hard-shell clams on Block Island both in this space and in my book, and even today, 3,000 miles from New England, clamming in the mud flats of California brings joy to my heart the way nothing else really does.

I owe all of this to my mom. It was she who taught me how to dig and eat clams. So imagine my surprise when it finally dawned on me, sometime in my teenage years, that mom really doesn’t care for clams all that much.

Don’t get me wrong: She led our clamming expeditions on Block Island, her version of stuffed clams is one of my favorites, and no one else’s New England clam chowder can ever compare to hers. I only learned it was a Maine clam chowder later in life. More on that in a bit.

For mom, clams and clamming bring back bittersweet memories of her childhood on coastal New England. It was just after World War II, and while times weren’t so hard as in the Depression, the beauty of the shoreline was mixed with some hard, smelly work.

Every Friday during those summers it was up to mom and my Uncle David to gather steamer clams for dinner and quahogs for chowder. I asked her to tell me about it a few years ago, and this is her story:

The steamer or ‘piss clams’ were dug at low tide and we walked to the flat from our cottage in Ipswich carrying our large clam bucket, a pitchfork and a small tin can for the sea worms. [Mom sold them as bait.]

The steamers were plentiful then and the water wasn’t polluted so it was safe to eat the clams that we dug. The clams were easy to find, as when the tide goes out the clams bury themselves deep into the mud and leave a small round air hole, which is a dead giveaway that the clam is there. For some reason the clams like to all live together in the same area, so once we started to dig we found plenty of them.

We tried hard not to pierce their soft shells with the pitchfork and mostly were successful. We did this by not digging quite as deep as where the clams lay and then used our hands to finish the job. As we dug away the mud, we sometimes got cuts on our hands from the sharp empty clamshells that were sticking up at odd angles. No manicure in those days!

But what a delight it was to reach into the mud and come up with a juicy, spitting (they spit out a long stream of salt water when picked up to try to frighten you away), healthy steamer clam to plunk into the bucket!

…After we had a bucket full of steamer clams, we got our rowboat and went to the enormous sand bar off the south end of Plum Island, which juts out into Ipswich Bay. We would pull our boat up onto the bar and drop the anchor. If the tide turned and started coming in we would keep careful watch and keep moving the boat higher up onto the bar.

The process to find the giant sea clams (what we locally called quahogs) is to wade waist deep in the water out onto the bar and start to wiggle your toes in the lovely sandy bottom. When your heel, foot or toe hit something very hard you knew you had found your first quahog! Then you had to dive down under the water and using two hands dislodge the sea clam from its hold on the sand. This is easier said than done. The quahog has an enormous “foot” which it proceeds to stick out into the sand to help anchor it in place. So it is a tug of war to get the thing up and out of the sand.

Because we were waist deep in water we had to be up-ended very much like you see the ducks and swans do when they are looking for food. Fortunately, it only takes two or three of these large clams to make a very tasty chowder.

Sounds pretty fun to me, but once she returned home, I got a sense of why mom isn’t all that keen on clams to this day. Clams, if you’ve ever cleaned one, are pretty gnarly. And remember she was about 12 or 13 years old at the time.

…My job was to make the chowder. This meant I had to clean those enormous, nasty quahogs. To this day I really don’t enjoy eating clams of any kind. The quahogs had huge, nasty bellies which I had to separate and throw away, and they had a 5-6 inch long translucent, round tube in them that was slippery and hard. I don’t know how the clam used it [The tube is called the crystalline style; it’s part of the clam’s digestive system.], but it was yucky! That too had to be removed and thrown out.

That left the luscious, pink-colored, firm, meaty foot (the part that the quahog used to try to anchor itself in the sand so I couldn’t pull it up) and two large, round, white muscle hinges. These I was happy to grind up for the chowder. 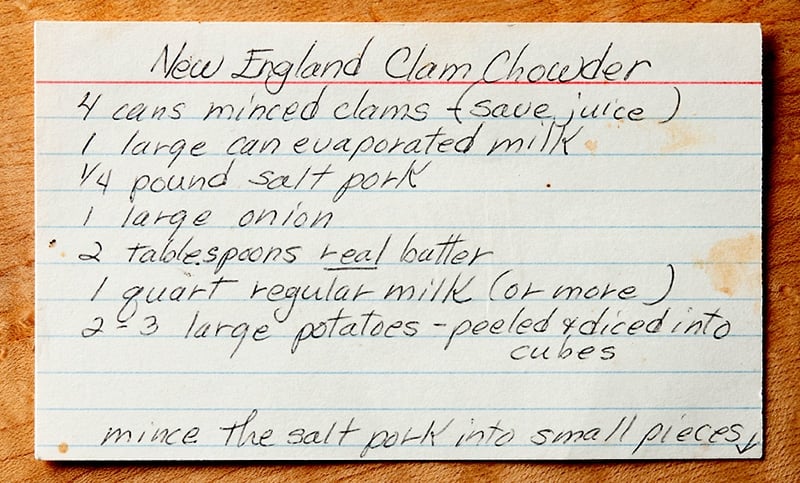 I’m pretty durable, but even I get skeeved out a bit by that freaky translucent tube; when you clean a clam, it seems to be alive — almost rocketing out of the clam belly when you cut it open. And, as they say, it was a brave person who first ate a clam. While not quite so snot-like as a raw oyster, a raw clam doesn’t scream out yummy! Even though it is.

Nonetheless, I grew up eating clams. Which means mom made them. And all her clam recipes are fantastic. Especially her Maine clam chowder.

For the first 30-odd years of my life, I just thought mom’s chowder was unique to our family. It is a white chowder like most New England versions, but unlike the chowders in much of Massachusetts, mom’s is soupy and brothy, not thick and creamy.

It was only when I delved more seriously into food that I realized this was a recognized variety of chowder; it’s a Maine clam chowder. I asked mom about this, and she reminded me that her mother grew up in Wiscasset, Maine. Mystery solved.

Looking back on all this, I am struck by how important it must have been for mom to raise us all as bona fide clam lovers, even though it was not something she herself still liked to eat. It was both an act of regional pride (Yankees eat clams. Period.) and, more importantly, an act of love.

I am thankful for that, and for all the other acts of love mom has shown me over the years, both large and small. Every time I eat this particular New England clam chowder, I think of her. I love you, mom. Happy Mother’s Day. I hope I did your chowder proud. 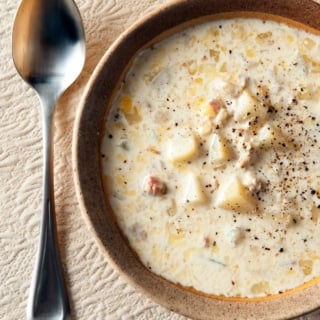 This chowder is thin and brothy, not thick and creamy. Other than that it is a recipe that goes back in my family probably a century or more. It is easy to make, with one exception, and it is an important one: You cannot allow this to boil, or even simmer, once the milk has been added. It will curdle. There are two ways to help stop this from happening. First, you can heat the milk and evaporated milk to steaming before adding it to the chowder pot. Or you can do what mom often does, which is to let the chowder base cool to room temperature before adding the milk and then reheating it; this process is called "ripening."
Prep Time15 mins
Cook Time1 hr
Total Time1 hr 15 mins
Course: Soup
Cuisine: American
Servings: 8 people
Calories: 257kcal
Author: Hank Shaw

Resist the urge to add any herbs or spices other than black pepper to this chowder. New Englanders in general, and Mainers in specific, are as spare in their words as they are in their cooking.