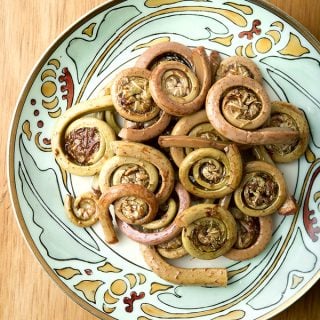 Fiddleheads ferns are the most whimsical of spring’s bounty. Very few cooks are not captivated by their shape, which is among the most mesmerizing in nature — think of the nautilus shell, a hurricane, or the Milky Way.

But fiddleheads are ephemeral, their season is short. So making pickled fiddleheads is a great way to preserve them for the rest of the year.

But you need to know that a fiddlehead is a shape, not a species. A great many ferns begin each year by sending up fiddleheads, but only two are generally eaten in this country: The ostrich fern in the East (and, oddly, British Columbia), and the lady fern in the West.

If you gather your own, you need to know the difference between these edible ferns and their inedible cousins, like, say, the sword fern. There is also the bracken fern, which is edible, but doesn’t produce fiddleheads.

The good news is you can buy them. Many markets sell fiddleheads, such as Whole Foods and Nugget here in NorCal, and you can sometimes find them at good farmer’s markets. You can also buy fiddleheads online.

Once you have your fiddleheads, what to do with them? I’ve cooked them with morels and ramps, in a simple fiddlehead stir fry, and sautéed with freshly caught trout. Fiddleheads need to be cooked, at least for a few minutes, and are great sautéed, stir-fried, batter fried, steamed, blanched, baked in casseroles, grilled… you get the point.

I always start by blanching my fiddleheads when I get them home. Boil in a large pot of salty water for 2 minutes, then plunge them into a bowl of ice water to cool. Cook briefly from there.

Fiddleheads will last about a week in the fridge, lightly wrapped in paper towels, which will turn brown for some reason while they’re in contact with the ferns. After a week, however, they get icky and slimy.

Pickled fiddleheads are the best way to preserve them, to my mind. You can of course do a regular vinegar pickle, but I prefer the old-style brine pickle: I like the tang that lacto-fermentation adds to fiddleheads. Lacto-wha? Don’t be scared. It’s just a brine pickle.

All you need to know is that you need the salt-to-water ratio that I give you in the recipe below, and you want to ferment below 75°F — above that temperature, weird things can happen. Let the pickles ferment for a week or two, and you are good to go.

What to do with your pickled fiddleheads? I just eat them, mostly with charcuterie like fromage de tête. Langdon adds them to a Sichuan stir fry, and I bet they’d be good in an omelet or Spanish tortilla. They last a year in the fridge, so you’ll have plenty of time to experiment. 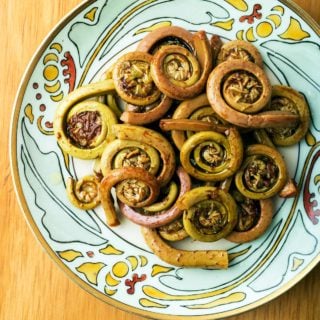 This recipe makes 2 pints and can be scaled up or down, and you will notice not everything is exact; pickling is like that because one fiddlehead might be twice as large as another. Also, I like these seasonings with the fiddleheads, but feel free to use your own. The only thing you shouldn't mess with is the salt-to-water ratio. This protects the vegetables from bad bacteria.
Prep Time20 mins
Cook Time5 mins
Total Time25 mins
Course: Appetizer, Side Dish
Cuisine: American
Servings: 16 servings
Calories: 13kcal
Author: Hank Shaw

Fermentation time is up to you. The pickles should be ready after about 5 days, but they will get tangier as time passes. I put mine in the fridge after two weeks, which gave them a sourness like a kosher dill pickle. Once the pickles are in the refrigerator, they will continue to ferment, but very slowly. I've held similar pickles for a year and they were still good.