Why yes, this is a recipe for head cheese. But don’t you think the French fromage de tete sounds sooo much better?

A few years back I wrote about the Italian version of this lovely luncheon meat, coppa di testa. I love that recipe, but it requires an expensive beef casing to make, which you can only get mail order. I knew then that the easier way to make head cheese is to put it in a loaf pan. But for whatever reason I waited several years before doing this again, intending to make use of said loaf pan.

I also didn’t want to just re-do my old recipe, which works really well. So I decided to go the French route and make their version, fromage de tete. That version is always in some sort of pan, and I happen to own a pretty Le Creuset enameled terrine pan so it seemed like a natural. All I needed was a pig’s head.

That chance came after a successful hunt in Northern California. So I toted home the pig’s head along with everything else. On the drive I debated whether to make this recipe or to delve into the mysterious world of scrapple. The French won out this time, so scrapple will have to await my next pig’s head.

Once you have a wild pig’s head, your job has only begun. Now you need to skin it, which is always gnarly.

Yes, you could in theory scald the head and scrape all the hair off, but I shudder to think how unpleasant that task might be. I actually have an inkling, because I did just that with the ears. Why bother? Well, pig ears are pretty good eating once you clean and braise them, but I really needed the ears for the collagen in them: This helps set the fromage de tete.

Yeah, I could have gone and bought some pig feet, but I didn’t feel like it.

When it was all said and done, I have to say this is a damn good head cheese. I am often pretty put off by some versions, which rely heavily on an iron-like gelatin to hold them together. There is a certain rubberiness to these versions of head cheese (many of them German) that I just can’t abide by.

This version, however, is really close to a rough country pate: The collagen certainly holds it together well, but it’s not really very noticeable. What you notice is a richness, a silkiness and a meatiness. Despite all the herbs and spices in this recipe, you really don’t pick up on them too much, although you would notice their absence.

My fromage de tete is a meat bomb, though, make no mistake. Just like my English duck pie, it’s tough to eat a whole slice without the aid of either mustard or horseradish and a few pickled things alongside. Combined, though, it’s perfect.

For spices, I use a very French spice mix inspired by one I read in the great Jane Grigson’s book, Charcuterie and French Pork Cookery. Feel free to alter your spice mix to suit yourself. For this recipe, however, it is pretty important to have the French quatre epices. You can find it in good supermarkets (the link takes you to an online source), or you can approximate your own by mixing:

And yes, I know that’s more than four. Blame the French. 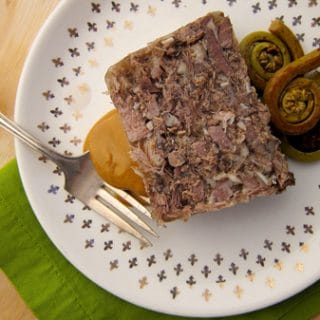 This recipe may sound like a big pain, but it really isn't that hard. There is virtually no technical skill necessary, although it will take you a full day to make your head cheese. Do it in a weekend, and you will have lunch meat for the following week. I also love a slice of fromage de tete while watching television, served with homemade mustard and various pickled things, with a piece of good bread and a beer nearby. Now that's my idea of a good TV dinner.
Prep Time30 mins
Cook Time6 hrs
Total Time6 hrs 30 mins
Course: Appetizer
Cuisine: French
Servings: 10 people
Calories: 44kcal
Author: Hank Shaw

You can do this with any large animal's head, including fish. I've done it with the heads from doe deer -- antlers can be tough to fit in the pot -- and I see no reason you can't do it with lamb, goats or calves or whatnot.