Bracken fern does indeed contain a carcinogen, that much is clear. It also contains an enzyme that makes Vitamin B1 less available to the body, so chronic consumption of bracken can lead to nastiness like beriberi. I’ve spent a lot of time over the years reading scientific papers with names like “Induction of Tumors in ACI Rats Given a Diet Containing Ptaquiloside, a Bracken Carcinogen.”

Breezy reading, this. But the slog has been worth it, if only because I refuse to trust the internet and my fellow foraging writers outright. Bracken is so controversial you will see them writing statements ranging from “eat it as much as you want, it’s fine,” to “never, ever, ever eat bracken, raw or cooked.”

The primary villain lurking within bracken fern is a substance called ptaquiloside. It is, by all accounts, nasty stuff. And bracken fiddleheads are packed with it, up to 0.8 percent by dry weight, according to some studies. But therein lies the first caveat: A raft of other studies shows that ptaquiloside levels vary wildly in bracken stands. Some in New Zealand were even found with none of the stuff at all. So you really have no idea how much — if any — of the carcinogen lies within your pretty fiddlehead.

It is abundantly clear, however, that if you eat raw bracken fiddleheads in the woods you will probably ingest ptaquiloside. And that’s not good eats.

But ptaquiloside has three properties that are of interest to us:

Virtually all the data on the subject link most human health problems associated with bracken fern to exposure to contaminated milk from animals eating bracken, contaminated groundwater near bracken stands, and, in some cases, long-term exposure to bracken spores; so if your yard is covered in bracken fern, you might want to dig most of it up.

What all this means is that a very normal cooking process for fiddleheads — blanching in salty water, then shocking in ice water, then sauteeing — renders the fiddlehead close to harmless.

Note that I say “close to harmless.” Even though most of the research out there suggests that normal human methods of eating bracken, which, incidentally, has been eaten by cultures across the globe since prehistory, denature or render harmless what ptaquiloside exists in a bracken fiddlehead, there is one nagging piece of data out there: There is an apparent link between chronic consumption of bracken and an increased level of throat and gastric cancers in the populations of Korea, Japan and parts of China. Bracken is widely eaten in Korea, Japan and parts of China. And when I mean “widely,” I mean almost every day in some cases. Bracken (gosari) is a classic part of bibimbap, one of the most famous Korean dishes there is.

Most of the research on this has been done by Japanese and Koreans, searching for clues as to why they seem to have high rates of throat and stomach cancer. Apparently there are a kaleidoscope of reasons, and habitual bracken-eating is among them. Like anything, ptaquiloside’s poison is in the dose. According to my reading of the research, the body apparently can process out only so much of the stuff, and constant eating of bracken puts too much in the system, and that’s what causes cancer.

Several reasons. First, bracken tastes wonderful, like asparagus, almonds and Tuscan black kale all rolled into one. Second, eating bracken is akin to drinking alcohol: Done responsibly, it is enjoyable and perfectly safe. But just as you would not rationally decide to drink a case of beer every day for a month, you would not rationally choose to eat a big plate of bracken ferns every day during the fiddlehead season.

I choose to eat bracken fiddleheads. How often? Maybe a half-dozen times a year. Eat them once and you will see what all the fuss is about, and make your own decision. Just remember your Aristotle:  All Things in Moderation.

If you do pick your own bracken fiddleheads, choose those that are not fully extended. You want them either in the horseshoe bend or at least tightly closed. Remember, the eagle’s talon should be clenched, not open. Do not eat them once their fronds unfurl. 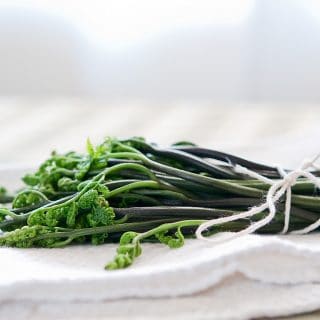 Bracken fern is as tasty eat as it is beautiful, but you need to take some special steps in cooking it to diminish its harmful properties. Once you do this, it is best to just simply cook these pretty things and enjoy their flavor, which is a combination of asparagus, almonds and kale. Truffle butter seemed like a natural choice as a flavoring -- regular butter and truffle salt is a good alternative. No truffle products? Just use the best butter you can afford and a nice fancy salt. Splurge! After all, you should only eat bracken a few times a year, so enjoy it!
Prep Time1 hr
Cook Time10 mins
Course: Appetizer
Cuisine: American
Servings: 4 people
Author: Hank Shaw