The moment I saw these Sicilian Easter pies in Saveur magazine, I knew I had to make them. Or at least something like them. Meat pies are something of an obsession for me. My mum made chicken pot pie a few times when I was a kid, but I even loved the store-bought ones. It’s the juxtaposition of bread and stew and meat that gets me.

Still, pot pies are unwieldy, difficult to eat. Then at some point in my boyhood I discovered Jamaican meat pies, which Rasta vendors would sell on street corners in New York City. Bright yellow with curry and loaded with fatty, spicy goodness, I ate them twice as often as I ate the similarly-shaped Jewish potato knishes, which could usually be found on the next corner over. Curry meat beats potatoes.

I think I was so entranced by both these creations because of how portable they were. You could eat your lunch while walking down the street. Obviously not a new concept, but it was new to me as a young teenager in the Big City.

Then came graduate school and Wisconsin, where I became a slave to the Cornish pasty — and not just any pasty, but those from Myles Teddywedgers on the corner of State Street in Madison. I think the shop is still there.

Huge, meaty fist-fulls of bread dough and steak and stew and oh my God were they wonderful! Absolutely, positively what you need to sustain yourself during a cold Madison winter.

This recipe here is basically an Italian version of the Cornish pasty. Big, bready crust loaded with meat and herbs and fat and deliciousness. Saveur’s original recipe makes pies that are a little to large to pick up and eat, so these are a bit smaller. And yes, those are antlers on the pie. I couldn’t resist. 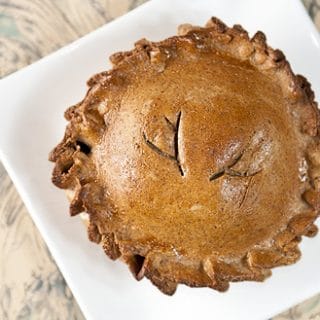 This recipe is loosely based on a Sicilian Easter lamb pie, and if you don't have venison, lamb works fine here. This is a great recipe for all that "venison burger" you might have lying around in your freezer, and, while it does takes time to make, the pies will keep for a week in the fridge.
Prep Time1 hr 20 mins
Cook Time30 mins
Total Time1 hr 50 mins
Course: Main Course
Cuisine: Italian
Servings: 3 six-inch pies
Calories: 690kcal
Author: Hank Shaw