Everyone wants to learn how to make ceviche, and, while ceviche recipes are all over the place, a basic ceviche is, more or less, pico de gallo with fish or seafood in it.

Ceviche is one of those seemingly esoteric dishes that Americans have truly embraced, especially those of us who live fairly near the ocean. A Peruvian invention, the original ceviche recipe is fish or seafood marinated in citrus juices, which then “cook” the fish. I’ve seen all sorts of versions served in restaurants, and if you look on any angler’s forum you’ll see recipes for ceviche of… well anything, really.

This can be a very bad idea.

The reason is because ceviche (sev-ee-chay) is still, for the most part, a raw fish dish.

The citrus bath the fish or seafood sits in does turn the meat opaque, giving it the appearance of being cooked, and it does kill some of the many wee beasties present in raw foods that can make you sick, notably the toxin vibrio. But the ceviche-making process will not protect you from the worst of the nasties, ranging from salmonella to parasites and worms.

Certain species of fish tend to be more or less prone to parasites. So the best fish for ceviche are those you would see at a trip to the sushi bar. Tuna and other pelagic species tend to be free of parasites (swordfish being a notable exception), as is farmed salmon (oddly). But ever notice that mackerel (saba) is always cured?

That’s because it can often contain anasakis worm larvae, also known as seal worm. Everything in the cod family is especially prone to infestation, too, which is why you never see cod sushi.

Here in the West, Pacific salmon, rockfish and halibut well known to harbor anasakis larvae, and to be safe you must freeze your fish before eating it raw. And when I mean freezing I mean really freezing. You need the fish to hit -4°F for about a week to do the trick. Note that older home freezers never hit this temperature.

(If you want to learn more on this topic, we did an entire podcast episode on parasites in fish.)

I don’t want to scare you too much. The vast majority of illnesses you might get from eating tainted or parasite-laden raw fish will be moderate to light. It’ll feel like food poisoning, with cramps, nausea and a serious case of the trots. Not fun, but not life-threatening, either. This is because in most cases we are not what’s called a “definitive” host, meaning the parasite hits a dead end with us.

Seal worm is a great example. The seal worm (anasakis) is around wherever there are seals and sea lions — they are the “definitive” host for that parasite. When we eat raw, tainted salmon, the worm says, “Cool! A mammal! Let’s attach to his intestines.” But the worm soon learns that a person is not a sea lion and it dies, but not before making you sick.

We are a definitive host to lovely critters like liver flukes and tapeworm, however, which are common in North American freshwater fish. The single largest vector for tapeworm in America is from people eating raw or undercooked trout. People think, “Hey! I love salmon sushi, and trout is just a cousin of a salmon, so…”

Bad idea. Under no circumstances should you eat freshwater fish raw or in ceviche that has not been properly frozen first. Remember the only way to get rid of a tapeworm, which can grow longer than 20 feet in your guts (nasty!) — is to take medicine that will kill it. You then need to eject the thing. Ew.

Now that I’ve freaked you all out,  here’s some good news: Actual illness from parasites and such is pretty rare. I’ve known guys who’ve eaten fresh raw salmon for years without getting sick, and raw Pacific salmon is one of the fish with the highest incidence of tapeworm and seal worm infestation.

What’s more, you can vastly improve your chances of avoiding parasites in your fish by killing the fish quickly when it comes overboard, bleeding it, and gutting it ASAP. This last bit is the most important because virtually all the parasites hang out in the viscera of fish, not the meat. In most cases, the meat gets tainted because when the fish dies the parasites panic and burrow into the meat.

Here is an overview of seafood safety from the Centers for Disease Control and Prevention.

Bottom Line: Unless you are tuna fishing, make your ceviche from pre-frozen fish. It’s just a smart thing to do.

Once it’s been properly frozen, however, the sky’s the limit. A traditional Peruvian ceviche recipe typically has onions, chiles, cilantro and sometimes corn and tomatoes. I normally go that route and serve an appetizer-style ceviche that’s great eaten on tortilla chips. Fantastic for a light dinner, or to put out when you are watching football or having a party.

I have variations on how to make ceviche that range all over the Latin American world, from a Chilean salmon ceviche, to Mexican crab ceviche tostadas, and even a ceviche de calamar, with squid.

Marinating times make a difference when you are making ceviche. Depending on the size of the fish pieces, you will need at least 30 minutes and normally an hour for the citrus to “cook” the fish. Two hours is fine, but beyond that the ceviche, while still good, becomes more of a pickled fish thing. It’s a subtle difference, but you can taste it.

If you don’t marinate the fish at all, and serve basically a mash-up of sushi and ceviche, you have Mexican aguachile.

Citrus matters, too. You always want the dominant citrus in the marinade to be either limes or lemons, which are far more acidic than oranges, grapefruits or tangerines. Add these fruits as an accent to the ceviche; I am especially fond of a little grapefruit in the mix. 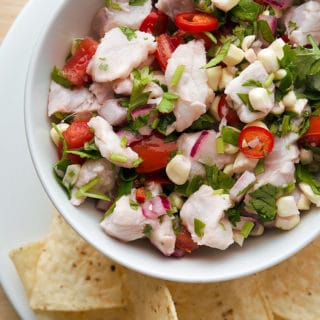 I find that white, lean fish work best for ceviche. I've made it with bluefish and salmon before but I don't like it so much; you might have a different opinion. My standard ceviche fish is Pacific rockfish or lingcod that's been pre-frozen. Any sort of snapper, grouper, black seabass, porgy, sea trout, white seabass or yellowtail will work, as will pre-frozen freshwater fish like walleye or perch.
Prep Time20 mins
Cook Time30 mins
Total Time50 mins
Course: Appetizer, Main Course, Snack
Cuisine: Mexican
Servings: 4 people
Calories: 201kcal
Author: Hank Shaw