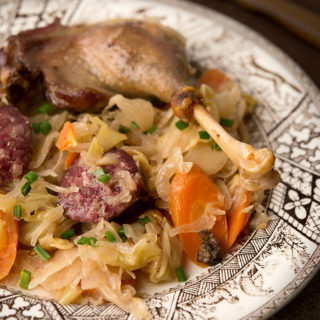 Pretty much every culture that eats duck makes braised duck, and this is a venerable recipe from Germany called braised duck Niederwald.

It seems like ages since I first wrote about this recipe, and it has been — at least in blogging time. I first posted a version of this braised duck back in early 2008, and it was so popular it even got written up in Field & Stream. But time marches on, and now I look back at that original recipe and cringe.

This is the upgrade. It is basically the same German braised Duck Niederwald that I first found in the pages of the The Derrydale Game Cookbook (which, incidentally, was designed by my sister!), only streamlined, improved and generally made better than the old version.

At it’s core, this is a German pot roast, made with duck or goose legs. It has all the familiar German ingredients: sausage, sauerkraut, cabbage, caraway, onions, juniper.

It is uncomplicated and homey, and it cries out for German bread or potatoes and either a wiezenbock, Maibock or even a hearty doppelbock like Spaten Optimator, which is what I drank when I ate this last version. You could of course drink a nice dry Austrian Riesling, too.

If you keep the browned skin up out of the braising liquid, it will stay pretty crispy. But if you want to take things to another level of crispiness, cook this braise in a 300°F oven until the meat is tender, then jack up the heat to 400°F and remove the lid for the last 15 minutes to get the skin extra crispy.

One thing that fascinates me with this recipe is the name: Niederwald. I know it happens to be a small town near Frankfurt in Germany, but beyond that I can find absolutely no reference to this dish other than the one in the Derrydale book. (And it doesn’t help that all I can think about when I say the name is Dean Wormer talking about Douglas Niedermeyer in “Animal House”… )

I have some other braised duck recipes, such as braised duck with leeks, and Peruvian ceviche de pato, which is braised legs with a chile and citrus sauce. 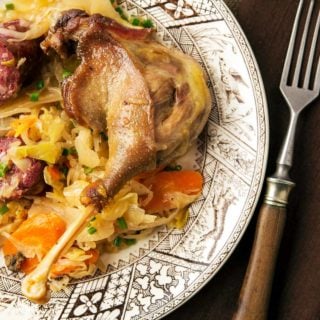 I have done this recipe with all kinds of wild or store-bought ducks and geese, but I prefer it with the legs from specklebelly geese, which is what I used in these pictures. I also prefer to use skin-on legs, because the skin adds a lot of flavor.
Prep Time20 mins
Cook Time2 hrs
Total Time2 hrs 20 mins
Course: Main Course
Cuisine: German
Servings: 6 people
Calories: 300kcal
Author: Hank Shaw

I always use either homemade sauerkraut or the refrigerated kind; it tastes better than the pressure-canned, shelf stable kraut. Juniper berries are easily available in larger supermarkets, on nearby bushes, or you can buy them online.