Roast venison is a wonderful meal for weekends or special occasions, and this recipe will walk you through what you need to know both for roasts, and for a whole deer leg, if you have a small animal.

To answer the question you might have in your head right now, yes, the meat in the picture is a little pale. That’s because this roast comes from a yearling antelope I shot in Wyoming; younger animals have paler meat. Think veal, but more humane.

This recipe works really well with a whole antelope or deer leg if you have small ones, like yearlings or Sitka blacktail in Alaska. But most of the time we’ll be using roasts from the hind leg. Hind leg roasts are by far the best cut of meat for roast venison because you can cook them to an internal temperature of about 135°F, or medium-rare.

Roast Venison is Not Pot Roast

What you are reading is a guide to roasting venison so it’s nicely cooked, not hammered. I love pot roasts, which are hammered, and I have a great recipe for venison pot roast. But that sort of dish is best done with venison shoulder, neck or shanks, not hind leg roasts — the reverse is also true.

What follows is the traditional way to make roast venison, a method of cooking that has been used forever. There is an alternate method, however, which is reverse searing. In this method, you slowly cook a venison roast until it’s close to the target temperature, then you sear at the end. I have a recipe for reverse seared roast venison here.

To be honest, I had hesitated to post a recipe for roast venison because roasting large joints of meat is more of an art than a science. In few other areas of cookery are recipes more suggestion than manual. It’s not brain surgery or anything, but you do need to be watchful when roasting a large joint of meat.

And true roasting requires the radiant heat of an open fire, and if you are ever lucky enough to eat a haunch of venison properly roasted over such a fire, you will never forget it. Texas barbecue comes close, but only in a galactic sense.

What most of us do is technically baking, but it still creates wonderful results if you know what you are doing.

I begin any roast by bringing the meat (or deer leg) towards room temperature. Roasting a cold joint of meat is a very, very bad idea. You get a charred exterior with a cold center if you do, and unless you enjoy this, you will be sad.

I also salt early and often. Salt when the meat is resting before cooking, salt in whatever rub I happen to be using, and salt when you serve. Adding salt little by little as the meat roasts makes it taste more of itself; adding it all at the end makes the meat taste of salt.

Venison is lean, so you need some sort of fat. Can you drape bacon over the roast as you cook? You bet, but only do it after you have done an initial sear, otherwise the exterior of the meat will look gray and unhappy.

Speaking of the initial sear, I prefer to get there by starting the roast in a roaring oven, somewhere between 450°F and 500°F. The smaller the roast, the hotter the oven. I roast the venison for at least 15 minutes this way, and up to 25 minutes. Then I drop the temperature to a more moderate 350°F. I wait until this point to add spices and herbs to the outside of the meat — if you add them in the beginning, they can burn and become nasty and bitter.

This is also a good time to drape that bacon over the roast, or baste it with fat or oil; melted beef fat is a great option.

Up to this point, you can follow a recipe verbatim. Finishing the roast venison requires attention and an eye for doneness, however.

For whatever reason, heat does not seem to increase in a linear fashion with roasting meat. I’ve tested a roast and have had it at 110°F and then a mere 10 minutes later have seen it jump all the way to 140°F. Not sure what’s going on here, but it happens. A lot.

I’ve used the fancy probe thermometers that Alton Brown champions, and they are very useful: You can pretty much stand there and watch the temperatures rise at the center of your roast. But if you don’t have one, you just need to be vigilant.

When in doubt, pull the meat early. You can always put it back in the oven. Roasts, no matter what meat they’re from, are serious, expensive pieces of meat. Letting one get away from you can ruin a holiday meal.

Finally, for the love of all that’s holy, rest roast venison thoroughly.

If you do not, all the juices will flow out of the meat and onto your cutting board. It is an unforgivable sin. Wait and you will be rewarded. How long? At least 10 minutes, even in an emergency. For a typical roast of between 4 and 6 pounds, 20 minutes is about right. Even 30 minutes is not too long.

As for carving, I find that bone-in roasts are best carved in large hunks — take a big hunk off the deer leg first, then carve into serving slices. Boneless roasts can just be sliced.

If you’re looking for other ways to cook large cuts of deer, here are more recipes for venison roasts. 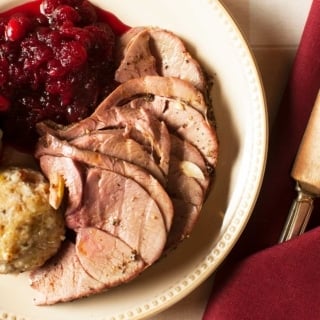 Serve this with classic trimmings: cranberry sauce, something green and a comforting starch. Mashed, baked or roasted potatoes are traditional, but I like German dumplings. If you decide to go the dumpling route, either make the semolina dumplings from my Hasenpfeffer recipe, or make the Bavarian bread dumplings above.