I know, most of you don’t have marlin lying around the house to make tacos de marlin. But this recipe works with any smoked fish, and it’s amazing, so walk with me a moment and I’ll show you.

Marlin tacos are a big deal along the Pacific coast of Mexico, and I’ve eaten tons of them all over Baja. Like a lot of Mexican dishes, there’s plenty of room for variation, and this recipe is an amalgam of the many I’ve eaten in places like Ensenada, La Paz and Cabo San Lucas, plus written recipes.

The fundamental ingredient in tacos de marlin is smoked marlin. I have a recipe for smoked marlin here, using the easier-to-find swordfish. If you read that recipe, you’ll see that smoked marlin is common in Baja. It’s primarily obtained when sport anglers kill a marlin — when the fish swallows a hook or fights so hard it can’t be released.

Smoked yellowtail or tuna are typical alternatives in Mexico, and literally any smoked fish will work with this recipe. Some excellent choices would be smoked shad, smoked whitefish, smoked salmon, smoked lake trout, smoked mullet or catfish, or smoked bluefish or mackerel.

Tacos de marlin are usually a sort of quesadilla, a folded-over taco cemented with melty cheese, either queso Chihuahua or queso Oaxaca. I’ve seen marlin tacos done on flour tortillas, but corn is the norm.

The filling is essentially a salpicon, a mish-mash of the marlin, roasted green chiles, tomatoes, onions and garlic, and herbs, cooked in a little butter.

You can make the filling up to a day or two ahead, then heat corn tortillas to make them pliable, set some shredded cheese down, top with the filling, fold over and sear on a comal or griddle until you get a little char. Sometimes the tortillas break, but since you have a layer of melted cheese, it’s all good.

Obviously marlin tacos are best hot off the comal, but I’ve eaten them at room temperature and they were still great.

Another option for the marlin filling is to use it in empanadas. I have a recipe for corn masa empanadas here, as well as a great dough recipe for fried empanadas, which are flour-based.

And if you’re looking for another idea for smoked fish tacos, I have a different recipe for smoked salmon tacos. 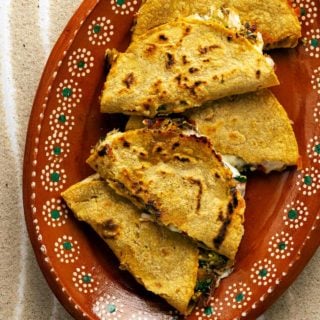 You can keep the finished tacos hot by putting them on a rack set over a baking sheet in a 200°F oven.