Smoked swordfish, smoked marlin, or really any big, meaty fish, is a fantastic way to eat these big chunks of meat — as an appetizer or main meal, depending on what you do with it. And this recipe has a backstory.

I can hear you: Why bother with smoked swordfish? It’s already the primo fish to grill, and do I need another method? The answer is yes, and here’s why.

It’s meaty, almost beefy in a way, and if done right, the fish stays juicy. Big fish like swordfish, marlin or tuna are also more savory than, say, perch or trout.

For me, it all started in Mexico. This recipe and method was inspired by all the smoked marlin I’ve eaten on my trips to Baja California and Baja Sur. It’s a thing there, and that’s what sent me down this road.

Tacos de marlin, marlin machaca, marlin burritos, smoked marlin stuffed into roasted chiles, you name it, the bajacalifornios and sudcalifornios make it. I’ve asked around, and smoked swordfish is largely considered the equivalent and is used interchangeably.

I finally got to see how at least one place makes their smoked marlin (as well as smoked yellowtail and tuna) when I visited Ahumadora Del Pacifico in Ensenada, Baja.

Every day they smoke fish, almost always big, meaty fish, out back over embers of manzanita or mesquite wood. Almost all their inventory sells out each day, for those aforementioned tacos, tostadas, etc.

I bought a big chunk of marlin and brought home the portion we didn’t eat as a snack; more on that in another post.

Later, I got a large hunk of swordfish from my friends at E-Fish, and I knew I needed to make some smoked swordfish to mimic the marlin — it’s way easier to buy swordfish in the United States than marlin, unless you live in Hawaii, where it’s also a thing.

How to Make Smoked Swordfish

I don’t know how Ahumadora Del Pacifico salts their fish, but I do have a very good method for salting big chunks of fish before smoking: Heavy salting for a short period.

Rinse, pat dry, then let the fish dry some more to form the pellicle, a stick-tacky film on the outside that helps smoke adhere, then smoke away.

I was looking for a Mexican flavor, so I went with mesquite, which is strong-tasting. If that’s not the goal, use a milder wood like alder or maple or apple.

Keep the temperatures low, below 200°F, and smoke for several hours. I prefer to go a full 4 hours, and if you can keep the temperature below 170°F, you can go as long as 5 or 6 hours. The Mexican smoked marlin is very smoky.

How to Use Smoked Swordfish

Once you have some, use your smoked swordfish, marlin or tuna or yellowtail or amberjack in any Mexican dish calling for smoked marlin, marlin ahumado, or slice it — yes, it’s meaty enough to be sliced with a sharp knife — and eat it on a cracker or by itself.

If you are used to smoked sturgeon, they are very, very close, so you can use them interchangeably.

I also like eating it hot, right out of the smoker, over a green salad.

It’s so meaty it won’t flake like, say, smoked salmon, smoked sablefish or smoked lake trout, but you can chunk it up for dishes like English fish pie, or Vietnamese smoked fish salad.

Once made, smoked swordfish will keep a week in the fridge, and it freezes well. 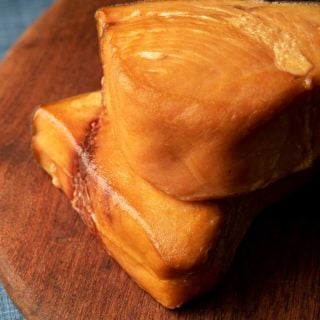