Javelina are so unloved. Poor skunk pigs. They get a bad rap. As I’ve written elsewhere, they are really quite tasty properly prepared. This ajiaco stew is one such way.

Now don’t get all hung up on it being javelina. Unless you are in Central America, or live in Arizona, New Mexico or Texas, you are not likely to have any lying around. Use pork, wild boar, turkey (wild or domesticated), or hell, even chicken.

This recipe is called an ajiaco, most common in Cuba, Colombia and Peru. My version is from the Yucatan, and derives from the excellent book Yucatán: Recipes from a Culinary Expedition by the late, great chef David Sterling. If you are at all interested in the food of this region, you absolutely must get yourself a copy. Nothing better has ever been written in the English language.

If you know a little Spanish, you’ll see the word ajo, or garlic, buried in the stew’s name. And yes, there is a truckload of garlic in this stew. Fear not, however, because almost all of it is slow roasted and mashed into a paste before it hits the stew. This adds a mellowness and a depth of flavor that make this dish the equal of another great Mexican stew, chocolomo, that I also make from time to time.

For me, the key to a good ajiaco stew is a variety of vegetables, slight spiciness — and those plantains! You know how every stew you ever eat has some morsel you linger on, and want to be your last spoonful? In this stew, it’s the plantains. Starchy-sweet, I was shocked at how well they held up to long cooking.

The diced potato dissolves in the cooking, thickening the stew, as does the sofrito of onion and bell pepper, forming a base the rest of the pot then highlights.

Ultimately, however, the vegetables are your choice. These are typical veggies in the Yucatan, and the plantain really adds something… but use what you have.

When you make this ajiaco recipe, make a lot of it. I’ve never in my life had a stew that was so much better the second, third or even fourth day after it was made as this one was. I almost didn’t post it after the first day, thinking it, well, just OK.

Holly and I were blown away on day two. So here it is, ajiaco, a lovely vegetable stew with javelina, pork or whatever. ¡Buen provecho!

I cook quite a lot of Yucatecan food, so if you like this recipe, you might want to try my rendition of shredded turkey Yucatan, poc chuc, which is grilled pork, dzik, which is a shredded venison salad, classic cochinita pibil, or sopa de lima. 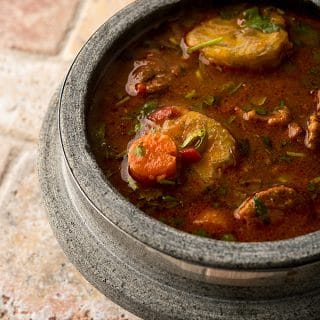 There are a few ingredients here that are easy to find in Latin markets: plantains, chipotles in adobo, fresh rendered lard and recado rojo, or achiote paste. Achiote paste is necessary for the dish, and if you can't find it in a market, you can buy it online. A tip on the onion and bell peppers for the sofrito: Pulse them in a food processor to really chop them small. You can then use the processor bowl to puree the charred tomatoes without an extra clean-up step.
Prep Time20 mins
Cook Time2 hrs
Total Time2 hrs 20 mins
Course: Soup
Cuisine: Mexican
Servings: 8 people
Calories: 533kcal
Author: Hank Shaw

As I mentioned above, of all the stews I've made over the years, this one improves the best with age. It's better on day two than day one, and even better a couple days later. It should keep for a week or so in the fridge.