The second after I shot my first javelina, I knew what I’d cook with it: Cochinita pibil.

Cochinita pibil is one of the signature dishes of the Yucatan, pork (or chicken or venison) slathered in an exotic-tasting spice mixture, citrus and herbs, then slow-cooked until it falls apart, then served on tortillas or with rice. It is spicy without being picante, although it’s often eaten with minced habaneros or hot sauce at the table.  Pickled red onions are a must.

Pronounced ko-chee-nee-tah peeb-eel, cochinita pibil is also call puerco pibil when made with an older hog. Pibil refers to a pib, an earth oven — basically a pit in the yard you cook things in. Most people these days cook their pibil in a pot in the oven, though.

Holly was the first one to introduce me to this dish. She used pork shoulder and it was phenomenal. I was hooked. But the dish never shows up on the menus of really any Mexican restaurant I’ve ever been to, largely because most of the Mexican restaurants here in America are run by people from Michoacan, Jalisco, Guanajuato or Nuevo Leon.

None of these are terribly close to the Yucatan. And remember folks, Mexico is a big country. We often forget that.

My next exposure to cochinita pibil was in the movie “Once Upon a Time in Mexico,” where a CIA agent played by Johnny Depp shoots anyone who makes this dish perfectly — to maintain balance in this world. It’s an odd sidenote in a great movie, but it highlights this dish the way “Big Night” created the timpano craze.

What got me thinking about cochinita pibil lately was the amazing book Yucatán: Recipes from a Culinary Expedition by the late David Sterling. It is the best regional Mexican cookbook I’ve ever seen, and it really highlights how different Yucatecan cuisine is from that of the rest of Mexico. If you are at all interested in the cooking of the Yucatan, you need this book. My recipe below is heavily influenced by his, and my recipe for the red annatto spice mixture called recado rojo is right from his book.

The dish hinges on two ingredients that seem harder to get than they are: Achiote paste and bitter (Seville) orange juice. In a perfect world you’d use real Seville oranges and make your own recado rojo, but guess what? Most people here in America don’t. They buy  pre-made achiote paste made either by El Yucateco or El Mexicano.

Surprisingly, again, given the dominance of Mexicans not from the Yucatan here in the United States, it is very easy to find in any Mexican market. And many places you can find bottles of jugo de naranja agria, which is Seville orange juice. That’s what you want. Barring that, mix regular orange juice, lime juice and grapefruit juice to get you close; the ratio is below.

It looks like it is soaked in chiles, but it isn’t. In fact, cochinita pibil is not hot at all, unless you want it to be. I do, so I mince either habanero chiles or the more delicious, less hot (but still zippy) chile manzano a.k.a rocoto chile. it’s Capsicum pubescens for those inclined to Latin.

Once you locate the achiote paste, this is a ridiculously easy dish to make with pork in all its forms, light-meat birds like chicken, turkey or pheasant, and even venison shoulder — which is actually done in Yucatan, where they hunt whitetails and brocket deer. And given the strength of spice and long cooking time, this is a great way to eat an old, trophy buck or a big ole’ boar hog.

To pickle the red onions, slice one from root to tip thinly and put the slices in a bowl. Sprinkle salt over it and then add about 1/4 to 1/2 cup freshly squeezed lime juice. Freshly squeezed matters, as the bottled stuff will impart a strange, metallic taste to the onions. Massage everything together for a few seconds, then cover the bowl and let the onions sit for at least 30 minutes, and up to a day. 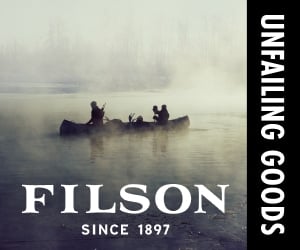 Do yourself a favor and learn this dish using pork, chicken or whatever makes you happy. You won’t be sad.

I cook quite a lot of Yucatecan food, so if you like this recipe, you might want to try my rendition of shredded turkey Yucatan, poc chuc, which is grilled pork, dzik, which is a shredded venison salad, a stew called ajiaco, or sopa de lima. 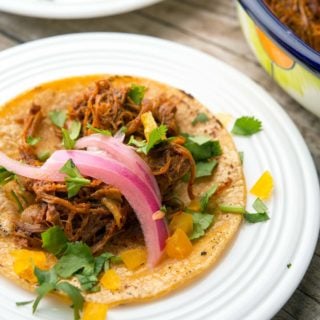 Unless you have a pit in your yard, you can't cook this in the traditional way, which is to wrap the meat and marinade closely in banana leaves and slow cook it in a pib, an earth oven. But cooking your cochinita pibil in a regular oven is pretty close -- only you'll want to get as much smoke into the deal as possible. I find using smoked salt works well, and if you can get some, use it. If not, no biggie. The weird herbs in this recipe, the epazote and avocado leaves, are actually pretty easy to find in Mexican markets, and chances are there's one near you. If you can't find them, skip it.
Prep Time25 mins
Cook Time4 hrs
Total Time4 hrs 25 mins
Course: Main Course
Cuisine: Mexican
Servings: 8 people
Calories: 450kcal
Author: Hank Shaw

If you want to make your own achiote paste, you prep the garlic by essentially setting the head of garlic on a gas burner and letting it catch fire. Obviously run the stovetop fan on high while doing this. Use tongs to move the garlic around, so it all cooks reasonably well. Let it cool and peel. You'll have some blackened bits, and this is good. Just don't incinerate the whole thing.