Whenever I’m talking to someone about hunting and the conversation turns to chasing rabbits, I am invariably asked about hasenpfeffer. It seems to be the only rabbit recipe anyone knows, and I am pretty sure we can thank Bugs Bunny for that one.

There is a 1962 episode of Loony Tunes where the king demands hasenpfeffer from his cook, who is of course Yosemite Sam. “Where’s my hasenpfeffer!” Sam grabs a knife and hilarity ensues.

Interestingly, there is a hidden truth in this episode: At the end, Bugs notes that this is the only time a “one-eyed Jack (rabbit) beats a king.” Hasenpfeffer, you see, is not a rabbit recipe. It requires a “hase,” the German word for hare. And our most common hare here in North America is the jackrabbit.

Hasenpfeffer is an old dish. It’s combination of vinegar, wine and lots of spices suggests it is at least as old as the Renaissance, and probably older. One source puts its origins in Westphalia, in the 1300s.

The “pfeffer” refers in this case not just to black pepper, which would be the literal translation, but to a general spiciness. not chile spicy, but highly seasoned with herbs, juniper and Spice Trade goodies like black pepper, allspice, cloves and such.

Like its cousin sauerbraten, hasenpfeffer hinges on a flavorful marinade and a long soak time of up to four days. You then braise it slowly and serve with a vegetable of your choice, plus noodles, potatoes or dumplings. I love dumplings, and the Germans happen to be masterful dumpling-makers. Only the Chinese beat them at it, in my opinion. Spätzle is my favorite, but I wanted to try something new for this recipe.

I am amassing a collection of German cookbooks, but so far my favorite is still Mimi Sheraton’s classic: The German Cookbook: A Complete Guide to Mastering Authentic German Cooking. This is to German food what Julia Child’s Mastering the Art of French Cooking is to French food.

Sheraton has lots of dumpling recipes in her book, and I was intrigued by one for semolina dumplings: Balls of semolina dough bound with egg and heavily spiced with nutmeg; it’s a perfect accompaniment to the hasenpfeffer. Done right, these dumplings are (like all good dumplings) light and fluffy. Done poorly, they are gut bombs.

A nice side of classic glazed carrots rounds things out. (The link is to a recipe for glazed carrots I developed with my friend Elise over at Simply Recipes).

This was our Thanksgiving meal, and we did not miss the turkey one bit. Warming, comfy and very traditional. Give this recipe a go for a Sunday dinner when the weather is cold and nasty, even if you use rabbit instead. You will not be sorry you did. 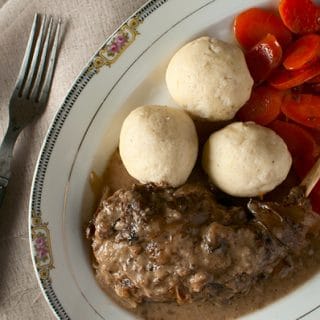 While hasenpfeffer should properly be made with hare (snowshoe or jackrabbit in the United States), hares are notoriously hard to find if you are not a hunter. So do what everyone else does and make it with rabbit. The actual making of the dish is pretty easy, but it will be far better if you give it the 2 to 3 days' worth of marinating time. Marinades take a long time to penetrate meat, and the flavorful marinade is the heart of hasenpfeffer.
Prep Time15 mins
Cook Time2 hrs 30 mins
Total Time2 hrs 45 mins
Course: Main Course
Cuisine: German
Servings: 8
Calories: 1106kcal
Author: Hank Shaw

Nothing in this recipe is difficult to find, with the possible exception of juniper berries. Juniper is used so often in wild game dishes that if you are a hunter, you really need a constant supply. You can either pick them yourself, find them in a large supermarket, or order juniper berries online.