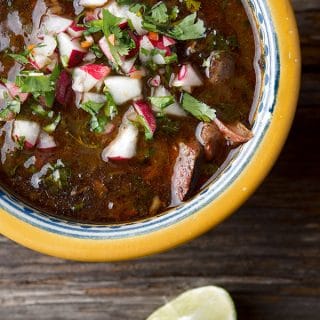 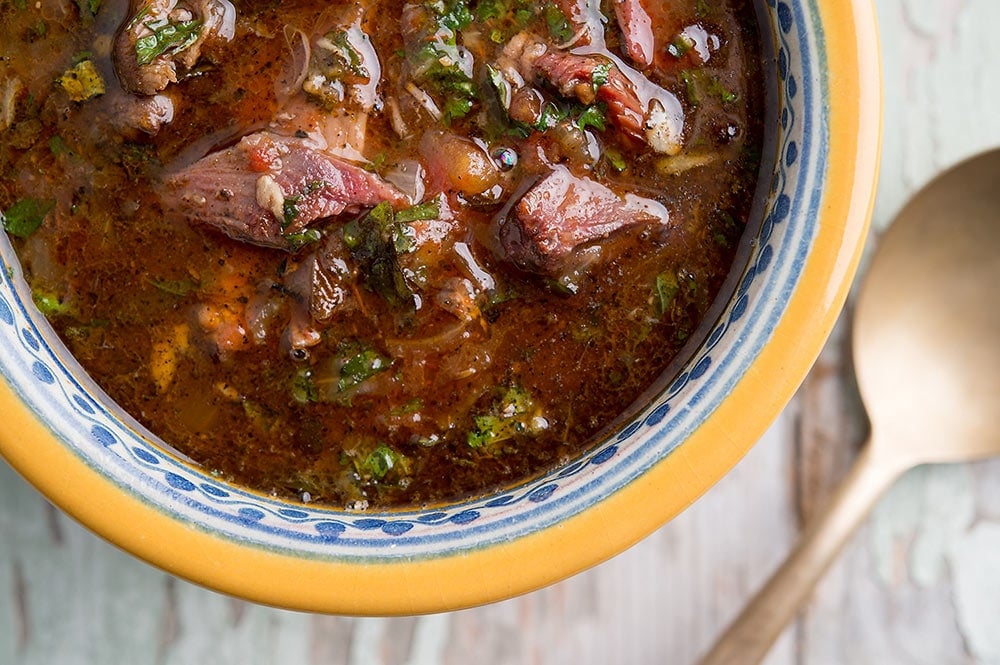 It seems that in most food writing, every dish is breathlessly described as “life changing” or “earth shattering” or somesuch. Please, people. How life changing can a cronut actually be? And if it does fundamentally change your existence, you may want to stop for a moment and reassess your life. You’re doing something wrong.

That said, this Mexican stew is indeed a singular eating experience — at least in my own experience. Why? Char.

Char. Blackening. Burnt-ness. Fire. It is to real Mexican cooking what velveting is to Chinese cooking: A technique that most Americans who are not of that ethnic group aren’t fully aware of, a technique that sets the cuisine apart from the European traditions. Most of us experience the magic of char in Mexican cooking in salsas, when you see the little flecks of black among the chiles. But it’s everywhere across the cuisine, and when you as a home cook discover this you go a long way toward hitting the right notes when you make a Mexican dish at home.

I’d never heard of the recipe until I read the David Sterling’s excellent cookbook Yucatán: Recipes from a Culinary Expedition. It is one of the best Mexican cookbooks I’ve ever read, and, as I mentioned when I riffed off his recipe for cochinita pibil, I’d be making several dishes from this book.

Chocolomo is normally a beef dish, made with meat and offal from a losing bull after the weekly bullfight.

Here I used venison and some wobbly bits: Shanks, a piece of shoulder, a kidney or two, a heart and a tongue. But you could easily shift this stew to cover dark meat birds like ducks and especially geese, using the giblets along with leg and wing meat.

I often use the word “deep” to describe flavor, but here I really, really mean it. There are layers of flavor in chocolomo that make you linger over each spoonful, wondering why the hell no Mexican restaurant you’ve ever been to actually makes this thrifty stew. (The reason is because most Mexican restaurants in the United States are not staffed by Yucatecans.) Punctuating it all is that char flavor.

What do I mean by it? Well, I can almost guarantee you know what I am talking about. Probably the most common way to find it is your typical backyard party, where someone has slightly burnt the chicken on the grill. Maybe it was you. But you like that taste, don’t you? Just so long as it isn’t overdone.

Argentine chef Francis Mallman puts the allure of the burnt this way in his book Seven Fires: Grilling the Argentine Way:

“I adore dissonance in food — two tastes fighting each other. It wakes up your palate and surprises you …charring or even burning adds an extra dimension to breads, vegetables and fruit. The right amount of burning or charring can be delicious and seductive: A burnt tomato, for example, has a has a dark crust bordering on bitter, while the inside is soft and gentle in texture and taste …what appeals to me is the element of danger and excitement in creating a burnt taste. Take the burning too far, and it destroys the dish. Stay just this side of the line, and it is lovely.”

Fire. Char. Burnt. Whatever you call it, there is an elemental, primal chord struck within us when we taste it. Desire for this flavor is most likely hard-wired in our primate brain, as it was fire that set us on our way to being who we are as a species. To capture it in a stew is truly something special. 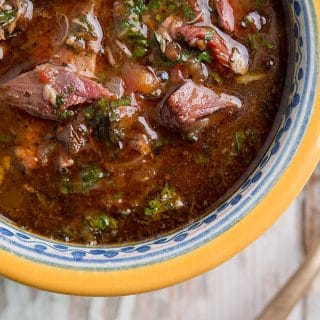 This stew is traditionally made with a losing bull after a bullfight, so it lends itself well to older, tougher, more flavorful animals. Any sort of venison certainly, but Canada geese, older hogs, bears, ducks, even jackrabbits would all work well here. You really want to toss in whatever offal you are OK with eating. With birds, certainly hearts and gizzards, and liver if you want. With mammals, hearts, kidneys, tongues, shanks, tail are all good choices. Chocolomo hinges on the distinct char flavor you get from burning the onions and garlic. If you don't do this, it will still be a nice stew, but it will lack the jarringly smoky flavor that attracts me to this recipe.
Prep Time1 hr
Cook Time3 hrs
Total Time4 hrs
Course: Soup
Cuisine: Mexican
Servings: 8 people
Calories: 416kcal
Author: Hank Shaw

Serve with the accompaniments and maybe some rice or bread. The stew keeps for a week in the fridge, and, like most stews, gets better a few days after it's made.