Fish pie is a British classic, and this version, fish pie with leeks, is my favorite. It easy to make and, like shepherd’s pie, is topped with mashed potatoes and cheese, then baked golden.

I used to have a thing against mixing cheese and fish, and I still like my fish clean, light and bright when the weather is warm. But I have to say that a hearty, British fish pie on a cold day really hits the spot.

This is British cooking at its best. Fish — one kind or many, as we shall see — lots of leeks, a rich sauce, fresh herbs and that cheesy mashed potato topping really work. It’s flavorful without being brassy.

Let’s start with the fish. Cod or haddock or pollock are traditional here, and any white fish works, from walleye and bass to catfish, snapper, Pacific rockfish or lingcod, halibut or perch. My favorites? Yellow perch, lingcod or tautog. But use what you have.

My fish pie with leeks is a little luxurious, however. In addition to the white fish, I will add some smoked fish, and, if I have it, some sort of shellfish, too. The smoked fish adds heft and smoke to the party, and the shellfish adds sweetness.

In the pictures, I used smoked salmon and crabmeat. Other good options would be smoked trout, smoked sablefish, or smoked mackerel. If you don’t have crabmeat, use crawfish tails, chopped lobster, small scallops or hell, even small clams, or better yet, smoked oysters.

As you can see, you can play with it. But using three different sorts of fish or seafood makes this a really special fish pie.

You’ll see a fair bit of dairy here, too. I recommend full-fat milk, cream and full-fat cheeses because they hold up better and balance out the lean fish. The only one that needs to be full fat is the milk: Skim milk will curdle.

The best time to make fish pie is the day after you made a big batch of mashed potatoes, because they are the only thing that really takes any time in this recipe. But it’s not a huge deal to make mashed potatoes just for this dish. If you have leftovers, you can make potato fish cakes, as I did.

If you want to, you could top the dishes with store-bought puff pastry instead. That’s a nice alternative, and is faster than making homemade mashed potatoes. Up to you.

Since this is a fish pie with leeks, you need leeks. They play nicely with the fish and mimic the crabmeat a little — and they’re traditional. But if you can’t find good leeks, use 2 yellow onions sliced thinly instead.

Fish pie is basically a meal in itself, so I only serve it with a side salad, or nothing at all.

Once made, you can reheat it in a toaster oven or regular oven set at 400°F. Fish pie keeps about a week in the fridge. It doesn’t freeze well as a pie, but the filling itself does freeze nicely; vacuum seal it in recipe-sized portions.

Also, sometimes you will have too much mashed potato or filling for the dishes you want to fill. If that happens, wait a day, then mix both the filling and the potatoes with beaten eggs and make potato fish cakes with them. 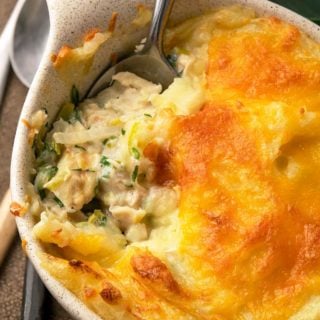 This is a simple fish pie with leeks or onions, topped with cheesy mashed potatoes. I prefer to use a variety of seafood here, but you can stick with one if you'd like. If you do, use the total weight of the fish and seafood below.
Prep Time45 mins
Cook Time20 mins
Total Time1 hr 5 mins
Course: lunch, Main Course
Cuisine: British
Servings: 6 servings
Calories: 521kcal
Author: Hank Shaw

Keep in mind that you can use almost any combination of fresh and smoked fish or seafood, as well as whatever shellfish you feel like — or you can leave out any of these elements.