It’s taken me more than a decade to post a recipe for venison shepherd’s pie on this site, largely due to post traumatic stress syndrome from gawd-awful lunch lady renditions of this classic dish way back in middle school.

Those versions were abominations. Somehow gelled up so you could cut them like lasagna — and since I grew up in New Jersey, those lunch ladies did make a mean lasagna. But this was not that. Middle school shepherd’s pie smelled odd, unnatural. Not of this earth.

Now, finally, decades later, I present to you a venison shepherd’s pie worthy of the name.

The dish is English, and really quite old, dating back to the 1700s, when it was called cottage pie. Pies are a big deal in Great Britain, but this particular one has always seemed a sort of cheat because it’s so easy.

If you’re not familiar with that one, you’re too young. It’s an old English song made famous by Simon and Garfunkel back in the 1970s. I was just a kid, but I remember the “parsley, sage, rosemary and thyme” line to this day. I always hated that song…

But, unlike the rest of the great British tradition of pies, shepherd’s pie has no real crust. Just a layer of mashed potatoes on top, entombing the goodness like thick ice in February. This would keep the flies off the meat, and add heft to the dish.

I imagine that a venison shepherd’s pie was not uncommon back in the 1700s, although in much of England only the wealthy could hunt, leaving us commoners to literally eat humble pie. “Umbles” is an old English term for offal, and the modern steak and kidney pie is that ancient delicacy’s descendent.

When you set out to make a venison shepherd’s pie, understand you are doing two things at once: Making mashed potatoes, and the filling that goes into the pie pan; more on the pan in a moment.

So yes, there will be several pots going, as well as the oven. Nonetheless this is an easy recipe.

I am assuming everyone knows how to make mashed potatoes, although I will detail my method below. I like to mix shredded cheddar cheese in there for flavor and calories. You make that first and let it sit on the stovetop.

Meanwhile. you are browning the meat, browning the onions — both very important steps, not to be shirked — adding whatever vegetable matter you’ve chosen to toss in there, and finally making a lovely gravy to tie it all together.

The gravy for my venison shepherd’s pie is a hodgepodge of good British things to eat: a dollop mustard, Worcestershire, a splash of Maggi, a touch of tomato paste.

It is thinned out with red wine (claret), or a dark, malty beer, some beef or venison stock, and the whole lot is cooked down so that the filling is wet, but not soupy.

Now you can go all homey and use a standard 9×13 casserole dish — this recipe is designed to fill one — or use something nicer, or even individual ramekins, which pretty up what is otherwise a very homey dish.

Once made, your venison shepherd’s pie will keep a week in the fridge. 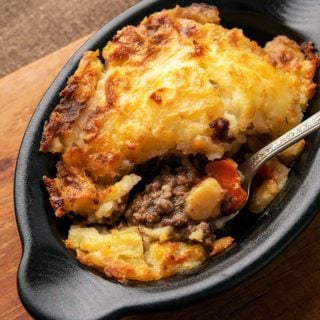