Sadly, most Americans know the Mexican state of Sinaloa only for the drug cartels. But there is so, so much more to the place, notably the food. Chilorio, braised, shredded pork, is easy to make and so versatile you’ll want to learn how to make it.

I first ate chilorio back in the late 1990s, when Holly made some for me. At the time, my knowledge of Mexican food wasn’t great, but I loved that it was tangy and flavorful without blowing my head off with chiles — and how great it was as leftovers.

Since then, I’ve only eaten chilorio in Baja California; I’ve not yet been to Sinaloa. But since Baja Sur and Sinaloa are “connected” by a popular ferry service across the Sea of Cortez, many Sinaloan specialties have taken root in Baja, notably shrimp tacos gobernador.

The soul of chilorio is the combination of chiles, cumin and something acidic, usually vinegar. This sets it apart from a similar dish from Sonora, carne con chile, which has a less acidic salsa and is usually served with a red meat in larger pieces.

Chilorio is always shredded, because it is intended to be used in tacos, burritos, tortas (Mexican sandwiches), or alongside rice and beans. I’ve seen it served in sopes, too; sopes are little corn masa boats filled with good things. And I imagine it would be fantastic in empanadas.

You make chilorio by simmering the meat with some onion, bay leaves and maybe some peppercorns and garlic cloves.

Either you simmer it in just enough water so that it will boil away and the meat sears in the fat that has rendered, or, you can do what I do, which is simmer until tender, then put in a pan with lard and sear that way.

I do this because wild pork takes a lot longer to get tender, and has little fat. Either way, you will want a good amount of lard to sear the meat and cook the salsa with.

The salsa is pretty standard: Char onions and garlic, and toast the cumin and dried chiles if you want to, put it all in a blender with Mexican oregano, water and salt and puree.

That goes into the searing meat and gets cooked by the lard, and, after a bit, you smash it all together to get a pan of shredded amazingness.

Once made, chilorio keeps for a few days in the fridge, and reheats well. 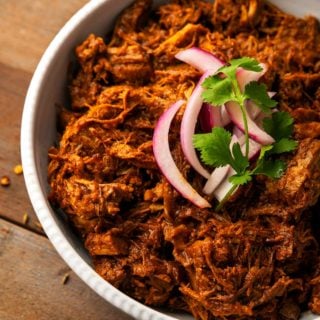 The timing reflects farmed pork or a young wild hog. Older animals might take longer to get tender.