Tacos gobernador, governor’s tacos, is one of those modern classics of Mexican cuisine. Interestingly, it’s the second such seafood classic from Sinaloa, a state known for good seafood; the other is aguachile, a modern take on ceviche.

It is also one of the many Mexican dishes that combines shrimp and cheese, a combination I have learned to love over the years — breaking from the “no cheese and seafood” rules I grew up with.

You can make these tacos on a griddle or a grill, and there are variations to tacos gobernador all over the Pacific coast of Mexico. The original is from Sinaloa, and legend has it that in 1987, the chefs at Los Arcos in Mazatlan invented these tacos to impress the governor of Sinaloa, who was visiting them.

But even searching for the original recipe from Los Arcos turns up variation. Some versions claiming to be the original include celery and, oddly, machaca, which is finely shredded dried beef. Most do not, however, and I suspect this could be a mix-up in conversations between cooks: Machaca de camaron is a term in Pacific Mexico for chopped shrimp. I’ve seen cooks from other parts of Mexico miss this and add the dried beef.

All variations of tacos gobernador that I have seen and eaten, and there are a lot of them, include the following:

Regardless of the exact combination you choose, it’s a good one. The cheese adds heft to the taco, and the little edges that brown or even burn are one of the highlights. Even with all that, tacos gobernador are still light enough to make a half dozen disappear.

Making these is a bit more like making a quesadilla than a traditional taco. You warm the tortillas, then add some cheese, and, once it starts melting, add the remaining filling and fold the taco over to get it to stick. You are shooting for an open quesadilla, as you can see in the picture.

Be warned: Tacos gobernador are as messy as they are delicious. Eat with plenty of beer and some hot sauce. Extra points if you can spot why I chose the particular hot sauce you see in the pictures… 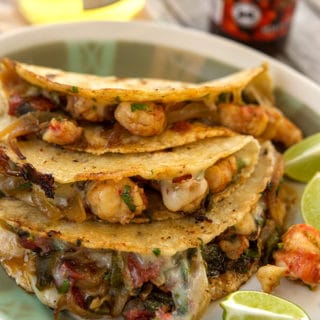 There are a number of variations on this recipe, which I outline above. If you are looking for make-ahead tips, the poblanos can be roasted and sliced a day or three beforehand, and the filling mix can be cooked ahead of time, although the shrimp will get a bit overcooked if you reheat it.
Prep Time45 mins
Cook Time20 mins
Course: Appetizer, lunch, Main Course
Cuisine: Mexican
Servings: 4 servings
Calories: 366kcal
Author: Hank Shaw

NOTE: If you are not sure how to roast poblano peppers, here is a video on the process.