I’ve based this venison soup off the traditional Scotch broth, which is a simple lamb and barley soup with carrots, turnips and other wintry things.

Only I am using venison here instead of lamb. Venison is still widely eaten in the United Kingdom, and Scotland is home to one of the largest remaining herds of red deer (they’re like our elk) left in Europe. So it seemed appropriate.

My special ingredient? Nettles. Blanched and chopped, nettles — a wild vegetable adored by both Irish and Scots cooks — add a vivid spring green to the soup. If you can’t get nettles, use spinach or chard.

There is one vital key to my version of venison soup: Never let this soup boil. I mean, you can still eat the soup if you do, but you will wonder what all the fuss is about. If you keep the venison cooking below a simmer — about 170°F — this will break down the connective tissue of the meat while at the same time keeping the venison tender and pink. If the soup boils, the meat will tighten up and turn gray.

The recipe keeps well in the fridge for up to a week, although the barley will swell over time. It is best eaten the day after it is made. 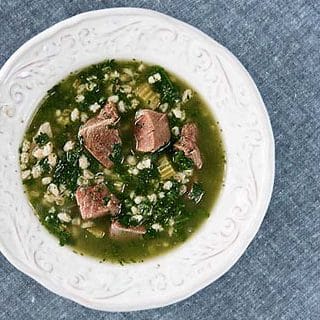